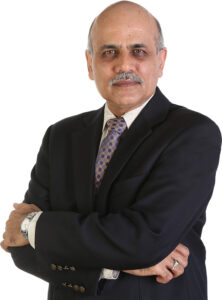 Growing up in India, Darshan witnessed the transitioning of that country’s economy from an avowedly socialist one, with the government owning outright certain sectors of the economy and excessively regulating what private enterprise existed, to a significantly much freer market economy. This experience has given Darshan some unusual insights into the role of the government in an economy, as also the consequences of government policy on the populace.

On the political front, Darshan saw the evolution of Indian politics from the overwhelming dominance of one party to a splintering among many regional and ideological parties. The authoritarianism of the earlier decades was replaced by deal-making and compromises. This transition has had a profound impact on the exercise of political power.

Darshan is of the opinion that his experiences on these two fronts are very relevant to the Canadian landscape of the 21st century.

After becoming a Chartered Accountant, Darshan worked in India, Africa and the Middle East, with some exposure to Central Asia as well, before moving to Canada. The years of living in many different societies and cultures were of invaluable educational value that helped Darshan understand the nuances of integration as well as the points of divergence between diverse cultures. These two aspects are of immediate – and increasingly urgent – importance in today’s Canada.

Darshan is not a member of any political party or any other social or ideological organization.