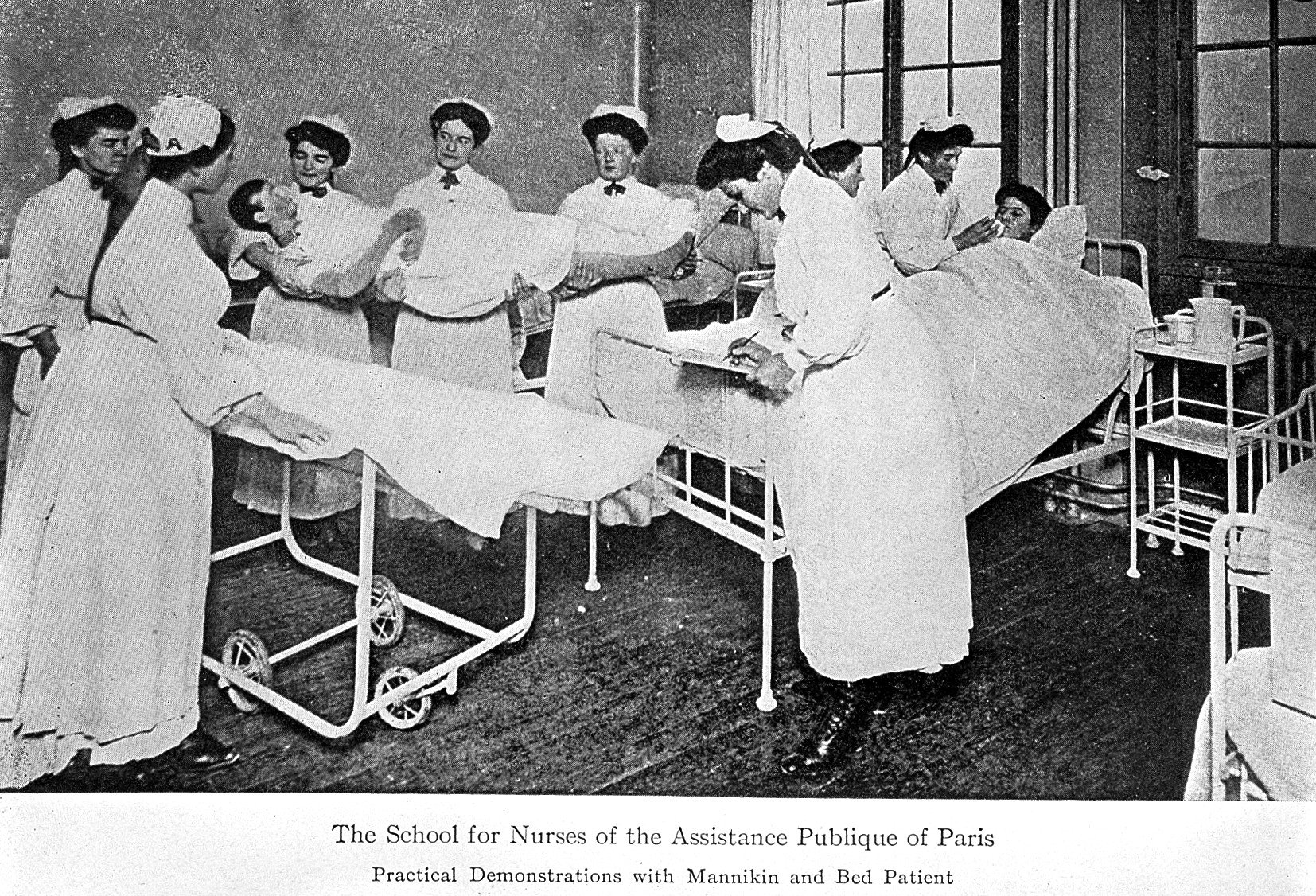 (Image Credit: Wellcome Images via Wikimedia Commons; the image is at this link. Used without modification under Creative Commons Licence)

Shortage of nurses is among the latest hot topics in Canada right now, but the problem actually goes back at least 13 years. In trademark Canadian fashion, we are paying attention only when the problem became a crisis.

One of my pet peeves in Canada is a result of several observations that, when taken together, show how our public debates result in a state of paralysis in matters of public policy. I have explored the development of such paralysis in my earlier article ‘Structural Dysfunction’. In a nutshell, this paralysis occurs because:

Ideally, it is the function of the media and the thought-leaders / opinion makers to clear this thicket of infructuous argumentation and lead the path to clarity. Unfortunately, our media largely fails at this, with the result that we get perpetual cacophony instead of a conclusion. After a while, the problem being discussed subsides (if we are lucky) or gets overtaken by another issue (if we aren’t lucky), so the problem becomes somewhat like a dormant volcano that will erupt again – with equal degree of unpredictability as to the timing of its next eruption. As and when that eruption occurs, we repeat the same futile exercise of what is charitably characterized as ‘debate’ in Canada.

From what I have seen so far, while a plethora of facts get bandied about in the public debates about policy matters, there are very few Canadians (including members of the media) who offer system-wide data that can help us see the overall picture on the matter at hand. It would not be unfair to state that the facts that get offered are intended to support / bolster that conclusion that the person offering these facts has already reached. I suppose we can call this ‘confirmation bias’.

But at the level of the average Canadian, the appetite for and appreciation of objective facts is significant. I experienced this firsthand when I wrote my first article on the state of our Universal Healthcare system, ‘Canada’s Healthcare Crisis’, where I quoted data from the World Bank, OECD, StatsCan and Canadian Institute of Health Information (CIHI). I received overwhelming response from my readers and the article has generated over 8,200 page visits so far. This is at once gratifying and humbling for an obscure blogger like me.

I experienced this again when I followed up with another article on our Universal Healthcare system, ‘Canadian Healthcare is NOT Underfunded’; it also cites data from the same official sources and has generated nearly 5,600 page visits. We can therefore conclude that the omission of such overall data in public debates & by the media is either borne out of partisanship or lack of knowledge. In either case, this omission does a great disservice to our society.

With the above background, let us take a look at one of the hot topics of today, viz., the shortage of nurses in our healthcare system. In keeping with what I said earlier about dredging up past governments’ record / actions, the Toronto Star’s Martin Regg Cohn wrote an article recently where he said:

“… Recall that a previous Progressive Conservative government, headed by Mike Harris, stoked a crisis in education that triggered strikes by teachers. Those tactics – caught on tape – helped the Harris Tories implement their controversial “Common Sense Revolution” decades ago.”

One fails to see the connection between the actions of the Harris government that left office 19 years ago, in a completely different policy area, and the performance of the Ford government today. My view is that barely concealed partisanship is at play here, the objective being fearmongering.

Instead of going that route, let us see what the data says about the availability of nurse in Canada over the years. According to this chart from OECD (available at this link), Canada is at the middle-of-the-pack in terms of the number of nurses per 1.000 of population (that number is 10.1 for the year 2020).

That was a snapshot of the numbers as of 2020. Now let us look at how the numbers have changed over the years and decades, in order to understand how serious we have been about improving the availability of nurses in Canada. The following chart from this link of OECD, showing the numbers from the years 2000 and, is instructive:

As you can see, while the number of nurses per 1,000 of population in Canada for 2019 (10.0) is slightly higher than the OECD average (8.8), a number of countries have seen a remarkable increase in their respective numbers over these two decades. Once again, Switzerland leads the pack, with a whopping 50%+ increase (from just below 12.0 to 18.0). In Germany, the number went up from 10 to 13.9 (increase of 39%). In France, it went up from about 7 to 11.1 (increase of almost 60%). By contrast, in Canada, the number of nurses per 1,000 of population showed an anemic increase from about 9 to 10.0, or just over 11%. My conclusion from this data is that we haven’t been serious about increasing the availability of nurses for well over two decades. The crisis that we have on our hands now is, at least partly, the result of decades of neglect. Countries like Slovenia, the Netherlands, France and Luxembourg that were behind us on this metric in 2000 leapfrogged ahead us by 2019. Germany, which was neck-to-neck with us, has powered ahead of us. Considering that all the three major political parties have been in government in different provinces over this period (and some regional parties as well, including short-lived ones like the Wildrose Party in Alberta), we can – and should – rightfully say that all of them are culpable for the mess.

Is it possible to pin-point a particular period where things took a turn for the worse? I am leery of going into this aspect because of its potential to drag the discussion into the arena of partisanship. But I am confident that my readers are above such name-calling and blame-games, so here goes: the following chart from the World Bank makes the situation clear (see this link):

Before we discuss further, I am sure you have noticed that this chart pertains to data on nurses and midwives. Therefore, there will be some variance from the OECD numbers that I have provided above. With that clarification in place, the chart makes it painfully obvious that there was a precipitous decline between 2009 and 2010, when the number plummeted from 10.4 per 1,000 to 9.3, or about 10.58%. This was exacerbated by the fact that we did not reach the 2009 number until some time in 2019, or nearly a decade later. What caused this lost decade? Was the initial decline a result of the financial crisis of 2009? Given that government spending is less susceptible to economic crises than private (individual or business) spending, that seems unlikely. If anything, governments tend to increase their spending in such periods. Plus, as the data from CIHI that I have cited in ‘Canada’s Healthcare is NOT Underfunded’ shows clearly, our healthcare spending did NOT go down during the financial crisis – whether in nominal dollars, inflation-adjusted dollars or as a percentage of GDP. In fact, it increased.

Of course, the system being well-funded does not necessarily mean that enough of that funding was allocated to the nursing component of that system. But the sharp decline in the number of nurses and midwives in 2010 remains a mystery. However, we can safely conjecture that it took us a decade to recover from this setback partly because the pay for nurses isn’t attractive enough.

FOR A FEW DOLLARS MORE

In Ontario, much heat is being generated over Bill 124 by which, it is claimed ‘Ford froze nurses’ wages’. This claim if erroneous on two counts. Firstly, the Bill applies to all workers in the broader public service. Secondly, it didn’t ‘freeze’ their wages, but rather limited the annual wage increases to 1%. Whether we should pay our nurses more is a valid discussion to have (and I am in the ‘Yes’ camp), but misrepresenting facts isn’t the way to get there. In my view, it is precisely this kind of slanted messaging that turns policy issues into political battles and diverts our focus from our actual objectives, by painting a Conservative Premier as heartless towards nurses. The reality is that this is a nationwide problem that transcends political divides.

For example, let us look at British Columbia, where the NDP government of Premier John Horgan has been in office since 2017. In rural areas, nurses are ‘On-Call’, meaning that they have to remain available to rush to a request for their services. The agreement that the Ambulance Paramedics of British Columbia (APBC) for the period 2019-2022 specified that these ‘On-Call’ nurses are to be paid $2.00 per hour while they wait for a call (see page 98 of the Agreement at this link, under Clause F 8.00). My attention was drawn to this a couple of years ago by a person who works as an ‘On-Call’ nurse there, and I haven’t still understood how a workers’ union could have agreed to this. In all my experience in several countries over decades, workers who were kept ‘On-Call’ were always paid the regular wage for the waiting period. The logic is simple – being ‘On-Call’ prevents them from arranging their lives in a way that suits their personal needs first (for example, keeping their children at home instead of at a daycare). They can be called for duty at any moment, so the employer is effectively blocking their time for the purposes of work. Hence, logic dictates that they should be paid the normal wage for that time.

But instead of examining the factors at the root of our problem / crisis, we look for quick fixes. It was therefore unsurprising that demands to absorb foreign-trained nurses began the moment we started talking about the crisis of nurses’ shortage (for example, see this article in the Toronto Star, published on August 20, 2022). For the record, I believe that we should do a much better job of ensuring that all foreign trained people have an easier path to work in their fields, but this is the wrong way of going about it. I say this because a specific part of the current crisis is due to unvaccinated healthcare workers being fired from their jobs. Filling those vacancies with foreign-trained HCW’s will only prove to be a divisive measure, and hence a ‘remedy’ that merely leads to another problem – while leaving the original problem largely unresolved, i.e., adequate remuneration. As the Globe & Mail reported on July 06, 2022, ‘Burnt-out Canadian nurses are shipping out for better working conditions and pay’. If we opt to hire foreign-trained nurses, they will also reach this burnt-out stage at some point.

In my view, the proper solution to this crisis would need to be based on hard numbers. Separating urban and rural areas, what is the optimal ratio (for each area) of the number of nurses per 1,000 of population? What is the right level of pay that can keep them working in Canada for the long haul (ideally their entire careers)? What would be the impact of the above on the healthcare budget? Are there any areas where we can cut down on spending to mitigate this additional spending (administrative cost comes to mind here)? Over what duration can we implement this solution? And finally, in the interim between now and then, how do we cope, if needed by resorting to stop-gap measures?

Unfortunately, in Canada we don’t approach policy issues in a scientific manner, so I don’t envisage the above methodology to be adopted. The problem is likely to continue to fester, leading to steadily worsening situation, in tandem with our deteriorating healthcare system, which is – and will increasingly be – ‘universal’ only in name.