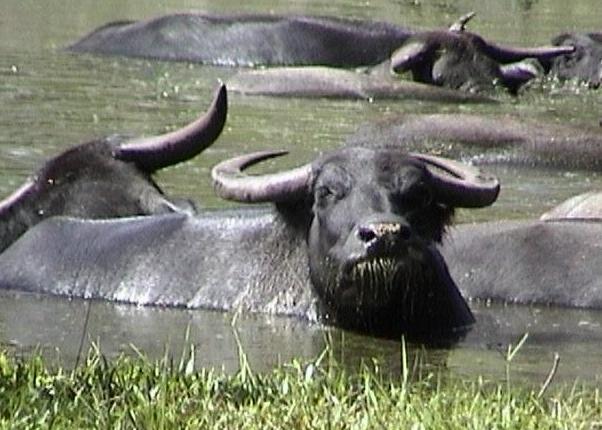 As the public agonizing continues in Canada over who gets the Covid-19 vaccine first, we simultaneously face the grim prospect of significantly dwindled supplies. This situation reminded me of an old Gujarati saying. As is common with such sayings, this one-liner is also packed with cultural context; without knowing this context, it become impossible to understand the saying properly. Here is the context for this saying:

One thing that is unique to Asia is that it is the only continent on which the buffalo got domesticated. In English, this species is referred to as ‘water buffalo’, but in South Asian languages, the word ‘buffalo’ means the domesticated variety. There are still isolated populations of wild buffalo in existence, but the term for them in India is ‘Gaur’ (in Hindi) or just ‘wild buffalo’ (in Gujarati).

Owning a buffalo as cattle provides extra benefit, as its milk has a higher fat-content compared to cow’s milk. It was common for many families to own one or more buffalos. Right after dawn, someone from the family would take it / them to the pasture. Alternatively, other people could do it for them for money. The buffaloes would be returned to the household just before dusk, at which point, they would be milked. The milk would then be churned to derive butter, which was reserved for cooking or making sweet dishes, while the residual liquid (buttermilk) was for immediate consumption. Churning milk is a laborious and time-consuming process when done manually, which meant that the buttermilk was typically available around dinner time.

With that context in place, here is the Gujarati saying:

The buffalo is still out grazing, and the buttermilk is far in the future – but members of the family to which it belongs are already squabbling over who will get to drink the buttermilk.

Over the last few days, we have been subjected to discouraging news on the front of Covid vaccine supplies. Pfizer has sharply reduced the number of doses to be delivered to Canada over the short term, while the European Union has moved to ban exports of the vaccines until the vendors catch up with their commitment in terms of quantities to EU-member countries. Desperate efforts by Canadian government to assuage the apprehensions of Canadians are sounding increasingly hollow. There is a real question mark on when – or if – Canada would be getting adequate quantities of vaccines.

Possibly to deal with the public dissatisfaction over this, an effort to downplay the importance of shortages appears to have been started in our Mainstream Media by characterizing vaccines, along with international travel, as ‘shiny objects’ that are supposedly diverting our attention from more worthy issues. There is no clarification offered as to what these worthy issues are.

One significant way in which our situation differs from that in the Gujarati saying is that unlike the squabbling family, we don’t own the buffalo. As I explored in detail in my earlier article Fighting The (Previous) Civil War, pharmaceutical readiness is not seen as an essential part of national security. Worse still, national security is not even on the radar of those who are in charge of public policy in Canada. We are, therefore, looking at a possibility – even if a remote one – that the buffalo may not make it back; those who own it may change their plans, whether we like that or not.

As I noted at the end of that article, Public Unity is the roof under which all the pillars of national security rest. As the shortage of vaccine doses exacerbates, this unity will come under considerable stress owing to fractious squabbling over who gets a dose first. Our social fabric is at risk of fraying – and not just at the edges. The fact that the pillars (military, manufacturing, healthcare and espionage) are themselves in poor shape in Canada through decades of neglect only serves to add to the gravity of the situation. We are in need of desperate measures, because the times are desperate.

One characteristic of water buffalo is that it likes to keep its body submerged in water (hence the name). It is also an obdurate animal, especially as compared to the cow. So, once it settles itself in a body of water, it takes a lot of grueling effort to get it to move. This has given rise to a saying in Hindi:

Gayee bhains paani mein (The buffalo has entered the water).

Are we, in Canada, at that stage on the front of Covid vaccine? Or are we somewhere worse?