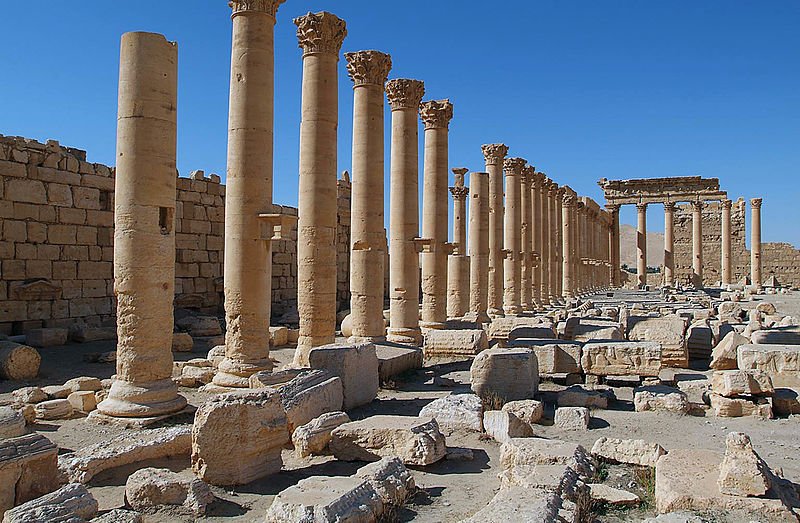 (Image Credit: ‘Temple of Bel, Palmyra’ from Wikimedia Commons, original creator James Gordon. The image is at this link)

The crux of Bill C-36 is that it enables proactive prosecution of people. This will change the behavior of many. As is often the case, there are historical precedents to help us visualize where this leads the Canadian society.

In Short order after Bill C-36 was tabled in the parliament, many commentators have opined that it would lead to chilling of speech and other behavior. For example, this article by Spencer Fernando lays out the argument in detail. The crux of the issue is that according to the Bill, if a person fears on reasonable grounds that another person will commit any of the specified acts, then legal proceedings may be started against that another person.

It is, of course, possible to defend this provision on grounds that it would be up to the Attorney General, and later the courts, to decide whether such ‘reasonable grounds’ exist in each case. However, this does not prevent the legal process from getting initiated; I suppose that when an Attorney General receives such an application, they would be obliged to carry out an investigation of the facts – and this would necessarily have to include the accused person. Therefore, there is room for frivolous litigation that causes unnecessary hardship for people who may not be guilty of anything.

The ever-present possibility that they may be dragged before the authorities for any slight that is both perceived and conjectured would lead many people to self-censor themselves in order avoid the hassle. With the current social mood in Canada, there is likely to be an argument that such modification of behavior is always a good thing and leads to a better society. However, this ignores the likelihood that the people amending their behavior are not necessarily likely to have engaged in the behavior that is the subject of the Bill.

In a nutshell, the Bill turns centuries of legal tradition on its head: whereas earlier everyone was supposed to be innocent until proved guilty, under the Bill, they are deemed guilty whether they amend their behavior or not. It is noteworthy here that ‘amending behavior’ is still dependent on the subjective perception of the accuser. So the bottom line is that there is no way for a person to make themselves immune to a complaint under Bill C-36.

As with many such initiatives, this has happened in history – and that too more than once. Let us look at one recent example of this phenomenon.

At the height of the mayhem in Iraq that ensued after the US invasion in 2003, I was following reports of the goings-on there in multiple media outlets. With the breakdown in structures of governance, the vacuum was soon filled by private groups that sprang up in ad-hoc and often chaotic fashion. Many – if not most – of them were of the Islamist kind. In their zeal to prove their greater ideological adherence over other competing groups, it became common for them to enforce ever-stricter theological compliance in the areas under their control. Behavior that had been normal before the invasion suddenly became objectionable on creatively reinterpreted religious grounds. Moreover, the reinterpretation was evolving quickly. As a result, apart from the arbitrariness of the accusations against them, it also became impossible for people to know what kind of behavior would fall afoul of the self-appointed theocrats in the future. As can be expected, people found a way to cope with this uncertainty.

It was around 2007 that I came across the term ‘proactive compliance’ in one of these reports (I think it was in the New York Times). The report explained this term as people guessing as to what new rules could be introduced in the near future, and adjusting their behavior in order to be in compliance of the yet to be announced rules.

This turn of events shouldn’t be surprising, if one pauses to think about the overall situation. The invasion had been launched based on the belief (if one goes by the official narrative of the time) that it was necessary because Saddam Hussein was anticipated to launch a war on the U.S. The fact that this hypothesis was shot through with ambiguity is irrelevant to the events that ensued. The U.S. government imagined a scenario, however improbable, and acted on a hypothesis about what it thought the other party was going to do. They even coined a term for it: pre-emptive war.

The irony here is that the people who were in agreement with the idea of a pre-emptive war are more likely to be opposed to Bill C-36 (which, in essence, enables pre-emptive prosecution), and vice versa, those who were viscerally against such a war are more likely to be supportive of Bill C-36. To the extent that this is the case, it just points to one of the basic flaws of human nature. We fondly believe that morality is objective, but that isn’t really the case. For most of us, a process of selection is at play at the subconscious level, and we pick and choose which ‘moral’ principle to believe in and/or abide by and/or impose on others.

Having looked at the underlying process, let us now examine how it is likely to unfold if Bill C-36 becomes the law of the land.

A couple of days after Bill C-36 was tabled in the parliament, I stumbled on to a home video on YouTube, showing a man singing a poem by the 19th century Urdu poet Mohammed Ibrahim Zauq. He was the poet-laureate of the Mughal court of Bahadur Shah Zafar. His rivalry with his contemporary poet Mirza Ghalib is well known.

The poem that the man was singing is of the ‘Ghazal’ genre (for a detailed explanation, see this link). These consist of a series of rhyming couplets. Each couplet can present a completely different thought, and therefore is self-contained. The last couplet (called the ‘Maqta’a) includes the name or pseudonym of the poet. The maqta’a of this particular ghazal is as follows:

This can be roughly translated as:

“Zauq (says), the Madrassa’s have messed up the minds of the Mullahs

Bring them to the pub, so they can get fixed”

Given the format of the ghazal genre, this is the only couplet in the poem on this subject. So there is no explanation as to why Zauq thought that being in a Madrassa is detrimental to one’s mental health. In particular, we have no clue as to whether Zauq held the persons (running the Madrassa’s) or the religion itself as being responsible for the malady that he claims to have observed. Nor is there any explanation of what contribution pubs have to offer in the way of restoring a person’s sanity. The readers / listeners are left to their own devices to derive these explanations. On the face of it, it appears that Zauq considered alcohol to be a better influence on people than religion, specifically the religion of Islam.

This situation leads us to a relevant question in the Canadian context: Is this couplet Islamophobic?

At a formal level, Zauq was only partly educated in theology, owing to his poor childhood. But, from all the accounts that I have come across, he was a devout Muslim. Whereas the attitude of his competitor Mirza Ghalib towards the clergy (and religiosity in general) was notably one of derision – numerous accounts of this exist – Zauq took his religion seriously.

Is it possible for a devoutly religious Muslim to be Islamophobic? Or at least hateful of Islamic clergy?

More importantly for this discussion, there is a second question that is directly relevant in light of Bill C-36: If Zauq were to be alive today, given the precedent of having penned this couplet, would it be reasonable to lodge a complaint with the Attorney General that he is likely to engage in similar Islamophobic / hateful speech?

Further, can the person who sings the couplet in the video that I linked to (who, from his appearance, is a Sikh) and the lady who accompanies him (and who has a Hindu name) on the Tabla (drums) as well as the audience be said to have engaged in / encouraged Islamophobic / hateful speech? Can a complaint be lodged against one or more of them under Bill C-36 (if it becomes law)?

Given the identities of the people involved, this video should be a case for celebrating multiculturalism. Instead, Bill C-36 would make it grounds for predicting future illegal behavior. This is solely because the notion of what constitutes ‘illegal behavior’ has been stretched to a ludicrous extent.

THE POWER OF ONE

Sadly, there are many places on earth where arbitrary prosecution is common. However, there is an important distinction to be made between such prosecution being launched by the authorities of the State, versus one that is initiated by individuals lacking such authority. As I explored in a previous article, ‘Canada’s Neo-Clergy’, the latter situation tends to be more corrosive and damaging because of the element of ‘competitive piety’ that it engenders and encourages on a large scale. An important legal concept to note here is one of ‘locus standi’, meaning the right to bring a legal action to a court of law, or to be heard. Traditionally, the person bringing this action is supposed to have a connection to the impugned action or its consequences. From the language of Bill C-36, this does not appear to be necessary; anyone can complain against anyone for anything, as long as it falls under the vague definitions of the Bill. This brings our neo-clergy on the scene.

I believe that by giving the backing of State power to our neo-clergy, Bill C-36 has the effect of opening the floodgates of empowering individuals to lodge complaints of dubious authenticity against others for things that they haven’t yet done, and things with which the complainant has no connection. I also believe that this is where the ‘chilling’ part comes in. As individuals voluntarily self-censor – and still remain fearful of things that they could be accused of in the absence of evidence – the increasing volume of silence in our society will stifle everything from dialogue to creativity. When you have to be alert as to the words you use and the things you do in the most mundane interactions, let alone creative endeavors, societal trust will come under stress and possibly break down. If Bill C-36 becomes law, I see a rapidly plummeting possibility that Canada will have its version of Zauq. All that will remain is fear and suspicion of others. And as history has shown over and over again, such regressive tendencies cause the downfall of societies.