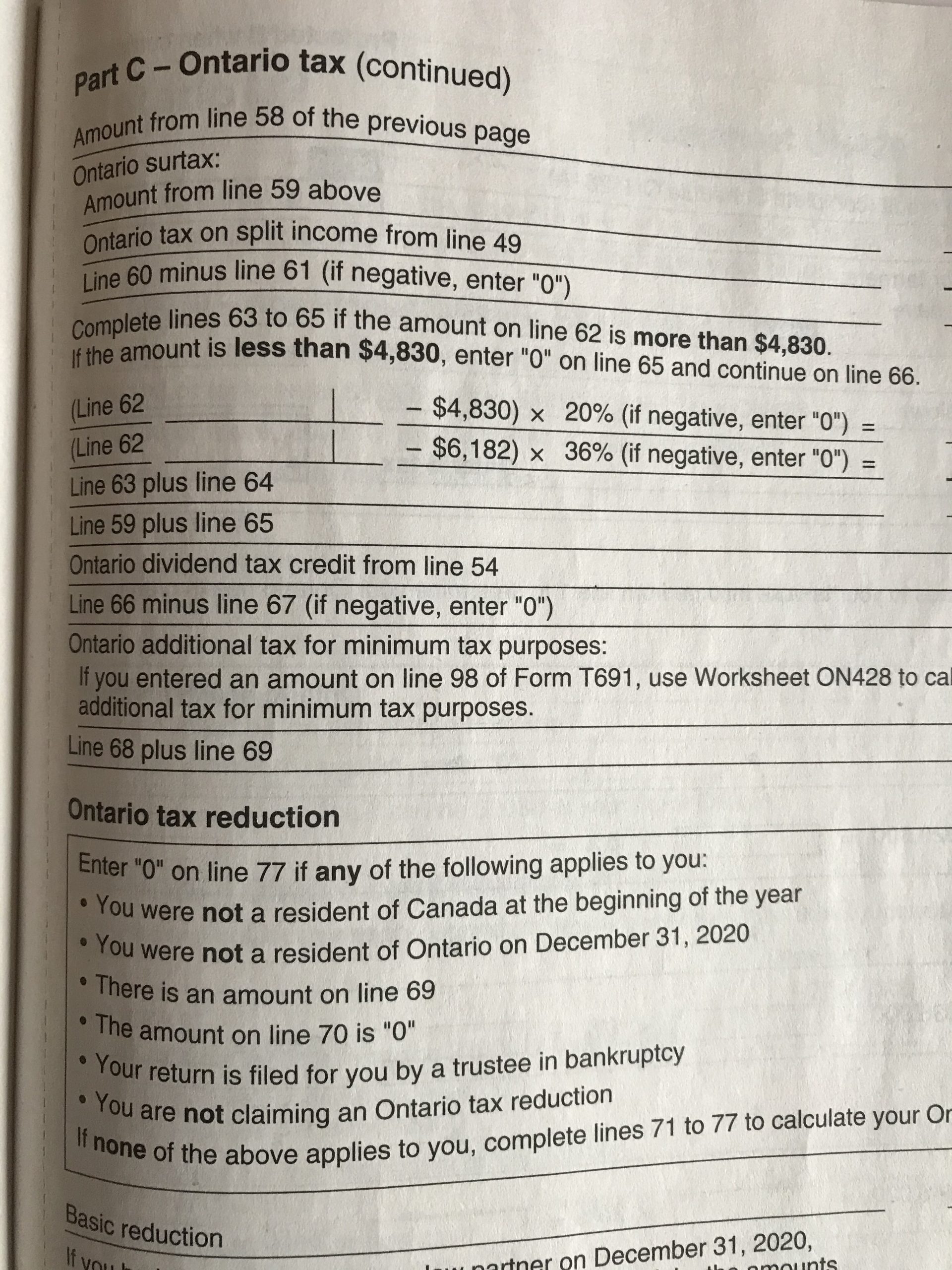 With a single stroke, the Ontario Conservatives can boost their support-level – AND make significant, permanent inroads into an important constituency that (at least by general perception) heavily votes Liberal.

In the ‘tax-season’ of every year, there is one issue that I find irritating. This year, having finished doing my taxes – and recovered from the experience – I decided to write about it. The issue has to do with the levy of ‘surtax’ in the Provincial part of the Income Tax Return in Ontario.

As you fill out the Provincial Return (Form ON428), Line 58 yields the net amount of provincial income tax on your income. Then there is an adjustment of Ontario tax on split income, so Line 62 should yield the actual amount of tax to be levied for the year. However, if this amount at Line 62 exceeds a certain amount (for the Tax Year 2020, this is $ 4,830), then additional tax is levied that is based on the amount of tax to be levied as per Line 62.

This phenomenon of ‘tax-on-tax’ isn’t exactly unique; there are several examples of the same – notably the HST on Carbon Tax that came into effect in 2019. A large number of Canadians have become used to double taxation, so any person objecting to any example of this is shouted down with epithets – or ignored with indifferent shrugs. The latter happened to me when, after spending some time in Canada, I learned that the price of petrol includes taxes, and then sales taxes are applied on that price. At the time, there used to be separate GST and PST; now the two are combined in HST. I found the reaction – oscillating between passivity and hearty endorsement – to be disturbing.

My first brush with a ‘tax-on tax’ was in India in the 1970’s. There also, the federal income tax had a surtax that applied if one had a tax liability (before the surtax) exceeding a certain amount. The then government of India, headed by Prime Minister Indira Gandhi, was avowedly socialist. In accordance with that ideology, those who were able to earn substantially more than their fellow-citizens were viewed with jealousy, and it became the government’s task to reduce the gap between the two groups. This, it did by pulling down those who had managed to climb a bit on the income ladder. In a nutshell, and to use current terminology, the surtax was about ‘social justice’. I was intuitively repulsed by the idea that having a tax liability exceeding a certain amount could make one liable to further tax, but couldn’t quite pinpoint the concept on which I found it repulsive.

Later, as I completed my studies to become a Chartered Accountant, I was able to articulate my argument better:

A tax – any tax – is supposed to come into play based on an activity. Having a tax liability is not an activity, but rather a result of one or more activities. Therefore, a surtax (or any ‘tax-on-tax’) is morally offensive; the State extracts more tax out of an individual simply because it can.

The trick that has been pulled in Canada is that in some cases, the first levy of tax has been made part of the cost of a product / service (as in the case of petrol) or included ‘above the line’ in an invoice (like in the case of the bill for natural gas). The price / invoice total then attracts GST / HST. This can only be described as a sleight of hand.

In the case of the surtax in Ontario, however, even this minimal attempt to hide double taxation is glaringly absent; the Return tells you blatantly that you owe some more tax because your tax liability exceeded a certain amount. This should be infuriating, but most of Ontarians are strangely silent on this (what I call) daylight robbery.

I don’t mean to impugn Ontarians’ intelligence with this observation. One part of their baffling silence is that the majority do their taxes online, or otherwise by use of software, whether personally or through a professional. Once the basic data has been input, the software calculates all numbers at electronic speed, and spits out a final combined amount of tax liability for federal and provincial income tax. Apart from the speed, this also means that the exact mechanics of the calculations are hidden inside the screen. The average person – lacking expert knowledge in tax matters in most cases – is not to be faulted for failing to notice the double taxation.

What irks me to no end is that the people who should have noticed this, and made it into a political issue, haven’t done either. I see a political opportunity here. Unlike many other political opportunities, this one stems from a genuine cause, and acting on it would result in real benefit to a lot of people.

This leads us to the question as to why they haven’t noticed this. Here is my hypothesis:

The way I see it, political parties in Canada are organized not around a set of ideological / policy objectives, but rather on connections and opportunism. Taking stereotypes with a pinch of salt, here is what Canadians think about ‘the other party’ when it comes to matters related to money:

As I said, these are stereotypes, but they contain a kernel of truth. Without getting bogged down in the details, suffice to say that while the hoi-polloi supporters of any party may be all fired up about what they are told is the ideology of their respective party, the action behind the curtain in each is sharply focused on who is connected with whom. Once a party gets into office, therefore, what it does as government depends almost entirely on who propelled the candidates before their election (money being a common propellant, but not the only one), and therefore gets to dictate the policies of that government.

When it comes to the Liberal, NDP and Green Parties, the existence of the surtax on Ontario Income Tax law is at least consistent with their overall stance – explicit or otherwise – that people earn money in order to pay taxes. But given the stated claim of the Conservatives that they believe that people should be able to keep more of their money than is the case currently, their inaction over the past three years on the matter of the surtax in Ontario is baffling, to say the least. This surtax should have been on their radar before they were elected to form the government. The brain-trust of the Ontario PC Party had enough time to realize this opening during their 15 years in the opposition – but this is assuming that such a brain-trust exists; as of now, there is zero evidence that it does. So the more probable reason why this issue wasn’t – and still isn’t – on the radar of the OPC is because the people pulling the strings of the government as regards policy don’t much care about the burden of the surtax; it is the ‘guys in the middle’ who get hurt.

Who are these ‘guys in the middle’?

WHERE THE SUN SHINES

Income tax liability of individuals can vary materially depending on their details (such as the amount they contributed to RRSP, eligible dependents, disability, medical expenses etc.). With that caveat, it can be safely said that a person who earns more than $ 90,000 will have a liability at Line 62 of ON428 that exceeds the threshold for the levy of surtax. Let us round this up to $ 100,000, to account for individual variations. Anyone earning over $ 100,000 is almost certain to pay the surtax.

If the examples of ‘tax-on-tax’ via HST and carbon tax are cases of sleight of hand, what is happening in ON428 defies my ability to come up with a term that adequately captures the dishonesty:

While the marginal rate of provincial income tax for incomes between $ 89,482 and $ 150,000 is DUPLICITOUSLY shown as 11.16% (in Part A of ON428), the actual rate is MORE THAN THRICE as much. I believe that this is purposefully done. If changes were to be made to incorporate the surtax liability in Part A, the rate of tax would have to be increased more than triple-fold, and there would be howls of protest and political Armageddon. Instead, the ‘rate’ is kept deceptively low, and the surtax is tacked on in a place in the return where its huge impact is hidden from view.

This is where the political opportunity for the Ontario PC government lies: bring this deception up for debate, and remove the surtax.

What is the political advantage in doing that? This advantage:

The ‘Sunshine List’ in Ontario (meaning public servants making more than $ 100,000 in a year) is published yearly, and the list for 2020 contains over 205,000 names (see this CBC report for details). Ever since I came to Canada, I have heard Conservatives complain that they lose elections because all public servants vote Liberal. I don’t think that is the case for 100% of them, but going by the political stance of their unions, they are heavily tilted in favor of Liberals. Making it public that for 15 years, the Ontario Liberal government was a party to this deception would undercut their support among public servants.

Money talks. And the larger the amount, the louder it talks.

I am of the opinion that such a move would go a long way in making support for Liberals among public servants wobbly, at the very least.

One practical objection that the opposition parties in Ontario are sure to come up with to a proposal to remove the surtax is the resulting shortfall in revenue, and the consequent increase in the budget deficit. All that the Conservatives have to do to counter that argument is:

Will such a move have the effect that I think it will? There is at least a probability, so the idea does deserve to be discussed internally and perhaps floated publicly. This leaves us with a final, crucial question:

Does the Ontario PC Party have enough number of functioning brains to try?