Once Upon A Nation 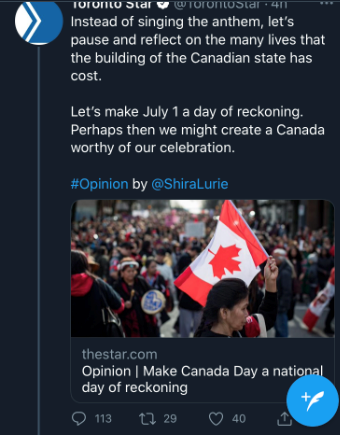 When PM Trudeau called Canada a ‘post-nation state’, I thought that he was laughably & ludicrously wrong. But now I have veered around to the view that he may have been right – albeit inadvertently, and not in the way that he meant.

During my initial years in Canada, I observed that one oft-occurring theme in media reports, opinion pieces and commentary was about how great Canada was. I was of the opinion that Canada is a pretty decent country compared to most others, but the hint of exceptionalism that I detected in these non-stop pieces was a bit irritating. I thought that not enough space was being devoted to our national shortcomings.

In the last little while, that has changed completely. Almost on a daily basis, I come across media reports, opinion pieces and commentary about how horrible Canada’s past is, and how the same ills continue in the present. If there is any difference now, it is that the Canadian society is even worse that what it was in the past. I find this more than irritating – the theme that so many Canadians have subscribed to is, in my view, counter-productive. It also has the potential to be a self-fulfilling prophecy.

How did we make this u-turn? And what does the change portend?

I will try to answer the latter question in this article.

THE COLOUR OF MONEY

Sometime in 2019, one day I was listening to a talk show on a major radio station as I drove home from work. The topic under discussion was ‘birth tourism’, stemming from a news story from Alberta. This issue is of importance to me; as this news report by CTV shows, the number of children born in Canada to mothers who do not have residency status in Canada has been steadily rising. Between 2010 and 2018, it rose from 1,354 to 4,099, representing an increase of nearly 203%. As a percentage of total births registered in Canada, it went up from 0.5% to 1.4% – a nearly three-fold jump.

I consider birth-tourism to be morally unacceptable, because it allows people with sufficient financial means to circumvent Canadian rules around immigration and citizenship. The fact that we haven’t made any attempt to close this glaring legal loophole amounts, in my view, to abdication of duty by a succession of our federal governments. So I was curious to hear the views of the host and his guests.

The host was taking a line that accorded with my views on the matter. One of his guests was Marit Stiles, MPP from the riding of Davenport in Toronto, and the health critic in the Ontario NDP caucus. When the host asked her views on the matter, she replied that since the mothers-to-be aren’t covered by the provincial health plans, they have to pay for the medical services at very high rates, and this means more money in the system. Therefore, it was a good thing.

I couldn’t believe my ears. “Don’t you realize that this amounts to selling Canadian citizenship?” I almost yelled out. I was so angry that I don’t remember what was said on the show thereafter. A few minutes later, I switched off the radio, and reflected on what I had heard. Here is the summary of my thoughts:

How much out of whack does one’s thinking need to be, especially as an avowed member of the anti-rich NDP, that one not only thinks but also says publicly that people with greater financial means should have faster and easier access to Canadian citizenship?

Finally, what does it augur for Canada when elected representatives have these views? These are the people sworn to uphold the Canadian Constitution. I interpret that oath to mean upholding the integrity of Canada. When they have such views, is Canada safe?

A VIEW FROM UP HIGH

Around the same time, one day I happened to be in a high rise residential building in downtown Toronto. Viewing the city from on high, I was struck by how outdated the public infrastructure looked. Without any premeditation, I remarked to my host that it seemed as if Canada stopped modernizing 50 years ago. My host agreed, and added that the discussion about re-doing Gardiner Expressway had been going on since before amalgamation (when the then-cities of Toronto, North York, Etobicoke and Scarborough were merged into what is the City of Toronto now). All that had been achieved in a quarter century was a bunch of studies, each round providing handsome revenue to consultants but yielding no concrete plan of action. Meanwhile, from time to time, we hear reports of chunks of concrete falling off – sometimes on to cars underneath.

Gardiner Expressway is the highway running through the southern end of the City where the financial district is located, including the second-most important financial market in North America. This may come as a shock to many, but as noted in this 2017 article in the Guardian (UK), nearly 75% of the mining companies globally are headquartered in Canada, and almost 60% are listed on the Toronto Stock Exchange (TSX). The presence of TSX alone is sufficient reason to have public infrastructure in the area that can be a showcase for Canada. Instead, it is dilapidated and crumbling. Whatever functional and visual value it has dates back from a different era. At the risk of slight exaggeration, it can be said that infrastructure of a city that is a commercial hub of the country in the Third World wouldn’t look worse.

This point dove-tailed into talk about another one, viz. the disastrous eyesore of the Eglinton line of light rail. This 19 KM line was first proposed in 2007 by then-Mayor David Miller. Construction work began in 2011 (after the plan was substantially changed by his successor, Rob Ford) – and is still ongoing in 2021. Its projected date of completion has undergone numerous ‘revisions’ (read: delays). The latest such ‘deadline’, projected for 2022, has now been thrown in doubt; as the CBC reported in May, the opening date ‘could now be in jeopardy’. The report does not give a new date, but rather notes that the opening date is ‘understood to be in flux’.  Even if the 19 KM long Line were to be opened in 2022, it would mean a rate of construction at less than 5 centimeters per day. Now it could be lower still. In the meantime, the businesses located along Eglinton Avenue are suffering – but that doesn’t appear to be anyone’s problem other than the business owners. Nor does the commuters’ concern bother anyone else but the commuters.

As I think of these forever-dragging projects, I cannot help but remember a project that I saw in Dubai. This was in the late 1990’s, when internet technologies were just bursting on to the scene. A new Free Trade Zone was planned to invite major companies like Microsoft, Oracle & Sun Microsystems etc. to set up base in the UAE. The project had a completion deadline of 364 days (i.e. one day less than a full year). Every day on my way to and from work, I used to pass this location. The speed of implementation was dizzying. The project was completed on schedule. What had been a patch of barren desert a year ago had been turned into a world-class business area, complete with date trees, lawn, flowering plants and even a running stream.

Why do I think this is important – and relevant to the subject of this article?

It is because (and this shouldn’t need to be said) efficient infrastructure forms the backbone of an economy. A society that prioritizes unending court battles and political see-sawing over infrastructure decisions and implementation will, at some point, begin to lack an economic backbone. Here it is important to bear in mind that this ‘lack of a backbone’ applies in a comparative sense, i.e. vis-à-vis the other economies that it competes with. Human existence is, in the end, about securing a competitive advantage, and those who fail at this will be left behind (at best) or be taken over (at worst). It pains me to observe that we are half-way to this undesirable outcome, and perhaps more than half-way.

In my childhood, I was fond of reading comics about a character named ‘The Phantom’. Today, its storyline would be considered ‘racist’ or ‘white supremacy’. The character lives deep inside the African jungle, and is friendly with the surrounding tribes. Depictions of their villages used to include a palisade that was meant to protect the village from predators and other animals. I used to wonder how a wall made of sticks and grass could protect against large animals such as elephants. But I understood that given the resources at their disposal, this flimsy barrier was the best they could devise for their security. These images taught me how collective security is one of the most basic instincts of societies. When that society is a nation, we call that ‘national security’.

How do we rate Canada’s approach to national security?

I have explored this topic in an earlier article, Fighting The Previous (Civil) War at length, the gist of which is that in modern times, national security is composed of six components: manufacturing capacity, energy supplies, military strength, a healthcare system that is able to handle sudden spikes in demand, effective espionage and societal cohesion. As I have delineated in that article, we are failing badly on each of these fronts:

The final point in the above list is especially important in light of the growing demands to cancel Canada Day. The city of Victoria, B.C. was the first one out of the stable, making the announcement on June 10, and an article in CTV asked whether other cities, including Toronto, should follow suit. On June 14, the Toronto Star published an opinion piece by University of Toronto professor Shira Lurie advocating for cancelling Canada Day across the nation, as, in her view, ‘it erases the many victims of Canada’s nationhood, in both the past and present’. The township of Wilmot near Kitchener, ON followed in the footsteps of Victoria and announced that it would be cancelling Canada Day celebrations.

Here is why I am against this gesture:

A national day, celebrating the birth of the nation in its current avatar, is crucially important in fostering unity across the various segments of its population. As I keep repeating, one of the most fundamental aspects of a nation is a shared sense of a common destiny. If we cancel the one day that helps us to come together, overcoming all our differences, to reaffirm our commitment to this shared vision, where are we going to articulate it?

There is another disturbing aspect here: demanding to cancel this single day of celebrating the nation is based on the misplaced conviction that we can demand unrealistically puritanical demands from the past. The demands to cancel Canada Day are, ostensibly, in response to the discovery of mass graves of First Nations children. I think it would be more appropriate to dedicate another day in the calendar to commemorate them, along with all the other victims of whatever wrongs may have been committed in the past. Acceding to this demand amounts to declaring that in its 154 years of existence, Canada has done nothing worthy of a celebration. It’s almost as if the nation hasn’t existed at all. If we start believing that about our past and our present, it will come true in the future. Once upon a time not too long ago, people living here may have believed that they had a nation. But keeping a nation requires constant and careful nurturing. If we are not careful, Prime Minister Trudeau’s words, that Canada is a ‘post-nation state’, may very well come true – however much we may have disagreed with him – only not in the sense in which he meant those words. We will become a nation that, once upon a time, was.