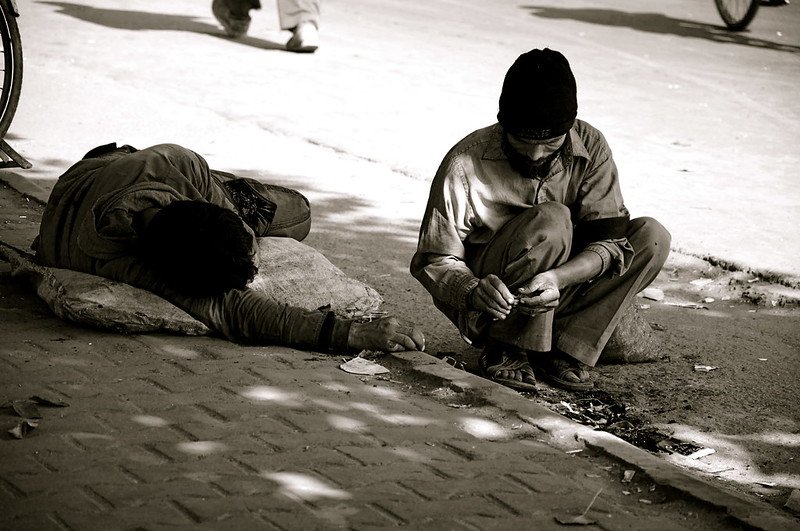 (Image Credit: Flickr account ‘Chris JL’; the image is at this link. Used without modification under Creative Commons Licence)

Discrimination & banishment have deep roots in human nature. The push to make a vaxx passport mandatory ignores the fact that such a policy would create a new caste of people to be discriminated against & banished from society.

Almost always, the word ‘untouchables’ is associated with the system of institutionalized discrimination along caste lines in the Indian subcontinent that was practiced primarily (but not exclusively) in the Hindu society. What is less commonly recalled, however, is that the same kind of physical avoidance and banishment of individuals from society for medical issues is also a recurring phenomenon in human history. As medical science progressed, though, it became possible for people to shed the fear of becoming afflicted with an incurable / debilitating / serious disease via transmission by those having the disease. In a nutshell, this change was the result of confidence.

Fear is the opposite of confidence. Therefore, when an epidemic causes widespread fear, it doesn’t take much time for many people to start advocating for the introduction of ‘medical untouchability’. For politicians who seek to remain in power on the basis of fear, it is quite natural to leverage any fear-inducing event to their advantage. One added bonus here is that any such exercise results in dividing people into different camps, which makes the citizenry more amenable to manipulation, and thence control. A vaccine passport is, thus, a stone that kills two birds at once.

Since the nature of the Covid crisis is primarily one relating to health, it is but natural that the demands to implement a system of ‘medical untouchability’ should emerge and find support among (a) the easily scared, and (b) Statists. Neither group has time for envisaging how such a system would look like as it gets implemented on the ground, day in, day out, at thousands – if not tens of thousands – of locations involving millions of people daily. Allow me to emphasize that we aren’t talking about a massive system that processes similar number of transactions via an automated, emotion-less interaction (such as making a payment by debit / credit card or scanning one’s Transit card at a terminal). With a vaccine passport, people are going to be told whether they will be granted (or denied) access to various premises, products and services. At this point, the desire of the person operating the system is likely to become a factor. I have envisaged some of these scenarios in my previous article ‘Why Vaccine Passports Are a Bad Idea’.

In a nutshell, there is a real prospect of arbitrary decisions to be made, on the part of participants from all the sides. The resulting friction and discord will be to the detriment of society – but would accrue benefit to those in charge of political systems.

At some point in my schooling years, my friends and I reached a realization (as, I suppose, most children do) that if one keeps going west on earth, one ends up in the east. Our classification of places in terms of their direction is, therefore, a matter of convenience; Japan is in the east, and California is in the west – but Japan is to the west of California. So a journey from California to Japan would amount to going westwards from a western location in order to reach an eastern location.

I was reminded of this childhood discovery recently when I came across people saying that they have ‘a right not to be infected’. Having rights is a good thing, and having more rights is even better – but a ‘right not to be infected’ is unenforceable with respect to all the multitudinous infections that we are prone to. Moreover, given that even fully vaccinated people can both receive and transmit Covid, trying to ensure this ‘right’ for everyone would involve each individual to be in a bubble. And since this can only be done forcibly, it would mean that all the rights of all the people would have to be denied all the time.

Put differently –and in terms my childhood discovery – a unidirectional quest for rights ends up with no rights.

There is a pejorative term in several South Asian languages: ‘double dholki’. A dholak is a horizontally shaped drum that can be played from both the sides (I think this feature is unique to South Asian culture). The term ‘double dholki’ is used for a person who says two contradictory things at different times, depending on their need for the moment.

Some years ago, there was a major movement in Canada to remove the practice of carding. In many places (if not most), the movement has succeeded. After carding was removed, however, violent crime (including gun-crime) has spiked. I have not come across any professionally conducted study to show whether this correlation is a case of causation. In their absence, the debate rages on as to what is behind the spike in violent crime.

My stance on this issue is right on the dividing line of the two sides: I don’t want anyone’s rights to be transgressed (as was alleged was the case with carding), but I want crime to be brought under control. If stopping carding is the cause, then we should have put our heads together to come up with another way of ensuring public safety that does not infringe the rights of Canadians. True to form, we muddle along in a state of ‘Structural Dysfunction’.

The reason why I think this is relevant in the present discussion is that, as far as I have seen, no one appears to have noticed the similarity between carding and vaccine passports. In particular, it baffles me in the extreme to see that the same people who pushed most vigorously against carding are also some of the most vociferous proponents of vaccine passports.

Moreover, one key difference between carding and vaccine passports is that while the former was administered by police officials who, at least in theory, are subject to a disciplinary process, the latter is a diffused system spread across business establishments large and small, to be administered by civilians of unknown credentials. Without meaning to cast aspersions on anyone, it should be possible to state that such a system would cause many dangers of arbitrariness.

One additional ground on which the push for vaccine passports is inconsistent is that it primarily comes from people and organizations that are tireless in their depiction of Canada as a ‘systemically racist’ country (other similar terms being ‘systemic hate’, ‘xenophobia’, ‘white supremacy’ etc.). Whether this claim is correct – to a greater or lesser degree – or not is another matter. What is relevant here is that if they are so convinced that there is widespread systemic racism in Canada, on what grounds do they believe that such a pervasive, intrusive and decentralized system would NOT be implemented in a racist manner by the people entrusted with its day-to-day functioning? As I hypothesized via an illustration in ‘Why Vaccine Passports Are a Bad Idea’, at the very least, the possibility of accusations of racism in its implementation is very real, and should be factored into the system from the very get-go. Otherwise, we run a very real risk of a spike in the ‘instances’ (whether real or conjured) of racist behavior across Canada.

On second thought, this possibility could be the very reason why the ‘activists’ against racism aren’t talking about it: for someone whose mission in life is to find racism anywhere and everywhere, a proposed system that has the potential to throw up even more ‘instances’ of it is a mouth-watering prospect. My personal opinion is that the demand for racism in Canada far exceeds its supply; a system of vaccination passports could go a long way in filling the gap.

Another glaring omission from the whole debate around vaccine passports is how it affects our First Nations. Over the centuries, their treatment by pretty much all the governments has been… shall we say, less than stellar. So, if an FN individual has an aversion to the mandatory nature of the passport, that would be entirely understandable. Are we going to shut them out of an assortment of venues and businesses? Doing so would only heap even more injustice on a people who have already suffered so much discrimination historically.

A couple of days ago, I was in a Twitter conversation with someone who kept insisting that the talk of medical exemptions from the requirement of having a vaccine passport amounted to nothing more than ‘machinations’. I mentioned that I personally know two people who previously suffered injury from other vaccines, and are therefore not supposed to take any more vaccines. This person wasn’t buying it.

While it would not be prudent to infer anything from the comments of an anonymous person on social media, this exchange left me wondering if there are more people like that, and if there are, how many. Here it is pertinent to note that all the opinion pieces from our ‘pliant punditocracy’ so far have maintained a studious silence on the matter of medical exemptions.

What all these factors boil down to is that the vaccine passport idea proposes to create a lower caste of people. Just as the caste system of yore prevented members of the lower castes from participating fully in society, a mandatory vaccine passport, with zero room for handling exceptions, does the same – it deems some people as being untouchables.

Some memberships of our new untouchables are permanent (such as people who cannot take the vaccine on medical grounds), while some others may temporarily belong to it (for example, a person who was unable to take the booster shot – perhaps even due to unavailability of the said shot in their location).

That last point also brings us to another disturbing possibility – that people’s ability to function in society could be put at the mercy of whoever it is that decides on the distribution of booster shots. Would they, by design, deprive a minority-dominated area of supplies? This is yet another point that our indefatigable Social Justice Warriors seem to have missed.

Before anyone objects to the above argument, let me point out that in the Toronto area (and Ontario generally), such disparity in the availability of Covid vaccine has already been reported.

In sum, the practical aspects of having and running a system of vaccine passports would result in creating a caste of untouchables, leading to increased friction in society, and a very real possibility of heightened discrimination. The resulting discord would bring us to the gates of hell. Of course, for the politically powerful, such a situation would be like being in heaven itself.