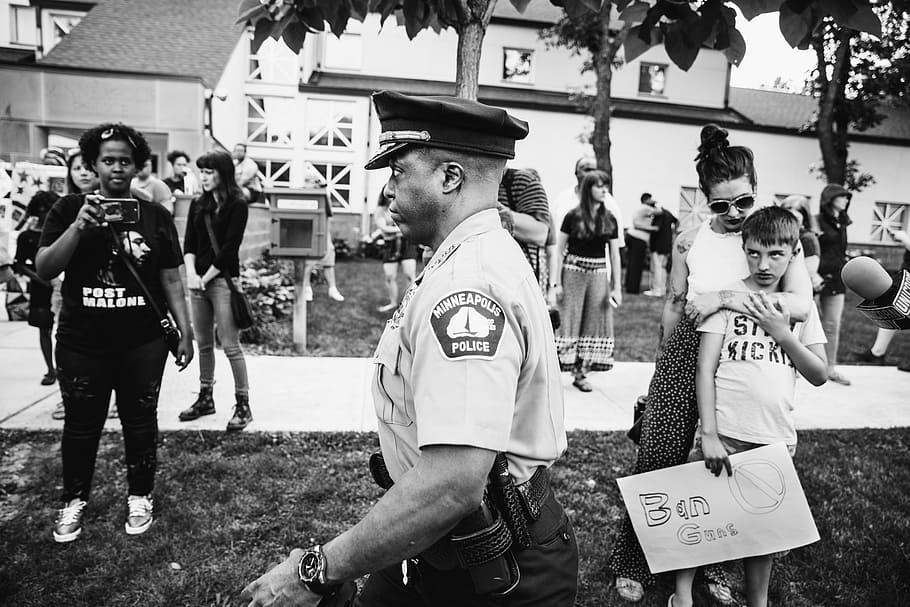 The anti-racism protests that started in the wake of the killing of George Floyd by a police officer in the US have gone off on two opposing tangents. On one hand, we see violent riots erupt in many parts of that country, thus making stronger police presence and actions necessary, while on the other hand there are demands to defund police departments countrywide. Both these topics are large enough to require separate treatment. Here I will be focusing on the latter. In order to do justice to the subject, I believe it will be necessary to start at the very beginning of what we know as ‘policing’ – but first, an anecdote.

A number of years ago, my wife was driving on a highway on a grey Fall day at dusk. The sky was heavily overcast and it was raining just a tad stronger than a mere drizzle. Visibility was extremely poor. Traffic was moving very slowly. The car behind hers ended up running into her rear bumper. Neither car had any visible damage – as far as seeing anything was possible – but the usual information was nevertheless exchanged between the two for insurance purposes. There was some gap inadvertently left in the information, however, and a couple of days later she received a call from OPP at her place of work. They wanted to tie up the loose ends. They asked her to meet them in the parking lot of a mall in the southern part of Mississauga on the forthcoming Saturday.

It happened to be sunny on Saturday, and the meeting place was close to the lake, so we decided to have a family outing. Two police cars arrived at the appointed time, and one officer – the junior among the two – said that my wife would have to get in his cruiser so that he could note down her responses to his questions. He asked me to get in the rear seat of the cruiser.

Once inside, initially I took the opportunity to imagine what it would feel like to be in the rear seat of a police cruiser in less innocuous circumstances. Then I noticed the way the police officer was interacting with my wife: he was striking the most perfect balance humanly possible between being crushingly courteous and exercising authority. Once he had all the information he wanted, we were allowed to go.

It has been over a dozen years since this incident, but even now whenever I think about it, I get goosebumps. I have never experienced in all my life, nor do I find it possible to imagine, a better interaction with the police anywhere on earth.

DOWN TO THE ROOTS

The great American author James A. Michener has observed in one of his books that it is possible that the first animals to be domesticated by humans were other humans. Apart from bringing us to the uncomfortable realization that we are just another species of animals on this planet, this insight also points to the fundamental human tendency to control other people.

Another great author of the 20th century, Cyril Northcote Parkinson, wrote an essay on the origins of government. His hypothesis was that what we call ‘government’ has its roots in the protection racket. This may sound offensive to many, perhaps even outlandish, but the essay, written in Parkinson’s trademark humorous style, makes the idea sound entirely plausible.

Combining these two ideas, I have arrived at a tentative theory as to how our modern form of government, of which policing is a part, could have evolved. I must emphasize here that the theory is very much a work-in-progress, and it is possible that in the future, I may hold different views from those described here. Here is the theory:

As we well know, the protection racket has, as its primary motivation, the desire to expropriate the value of the economic output of others, as doing so makes life comfortable for the protection-racketeer. The first and foremost concern of a protection-racketeer is the threat of someone else displacing him. This threat may originate from external actors or from within the society that is under his (usually, it is his, and rarely her) control. This necessitates the enlistment of individuals, mostly from within the society itself, to act as the ‘protection’ force. Motivation for enlistment is provided in the form of a promise of a share in the economic value expropriated. The collective mass of the enlistees lacks the sophistication to be called anything other than a posse; in fact, they are marauding parasites for the most part. There is hardly any distinction made between internal and external threats; both are sought to be tackled by the same posse.

Over time, and as civilization progresses, this posse gets bifurcated between those dealing with external threat versus internal threats. At this point, the society has a military and a police force, both performing distinctly different functions from the other.

Social developments over the last few centuries, and especially the last two hundred years or so in the western democratic world, have engendered much refinement in policing methods, including what the police are allowed to do in discharge of their function of maintaining internal peace. They are no longer permitted to extract value from the populations directly, their remuneration being a pre-determined, negotiated one. Their powers are no longer arbitrary, but are governed by legislation enacted by civilian representatives of the people. Their actions are liable to be questioned or even challenged. Each of these represents a significant advance. While much remains to be achieved on the front of accountability – and any creation of humans can always be improved upon – it would be fair to say that police forces in 21st century North America are very much accountable for their actions. The way they are able – even allowed – to function is markedly better than was the case even fifty years ago.

In economics, the concept of opportunity costs helps us to measure the cost of choosing one option, such cost being defined in terms of the value of the other options that could have been chosen.

What is the opportunity cost of defunding police departments? The answer depends on the extent to which they are defunded.

We hear from time to time about the need for more police officers so that the communities can be adequately served. We also hear about the need for new kind equipment, e.g. body-cams, that may help us to achieve better outcomes from the actions of the police. If these demands are even reasonably valid, defunding appears to be the least wise option. Having fewer or less well-equipped police officers is bound to result in higher intensity of their interactions with the people they are meant to serve and protect. These negative interactions, in turn, strengthen the case for further defunding. In a nutshell, we then get the perfect negative feedback loop.

At the extreme end of such measures, there is the move by the Minneapolis City Council to ‘dismantle’ its police department, and to replace it with a ‘community-based public service model’. Inquiring minds may want to know what such a model would look like.

I am of the opinion that a ‘community-based public service model’ has the potential to take us all the way back to the start of the evolution of the policing function – the largely uncontrolled and possibly uncontrollable – posse that answers to a local strongman. This may seem implausible now, but let us not forget that many seemingly implausible things have happened this very year.

Civilization is a fragile thing. In scientific terms, it is a system with low entropy – in fact, very low entropy. If its foundations are damaged in certain ways, it doesn’t take much to unravel.

What are the foundations of our modern civilization in the democratic West? Certain key areas stand out: rule of law as enforced by the police and adjudicated by the courts, monopoly of the State on the use of force, answerability of the various arms of government for their actions, supremacy of the will of the people and orderly transfer of power.

Defunding police forces strikes a fatal blow at the first two and consequently weakens greatly the remaining three. We will have, in effect, thrown the baby out with the bathwater. It would be infinitely more desirable to embark on a collaborative exercise to make our police forces even better than they already are. The only other option is to lose the civilization that we have – and just like a baby, it is too precious to be thrown out with the bathwater.