Where Was Your Orange Shirt Made? 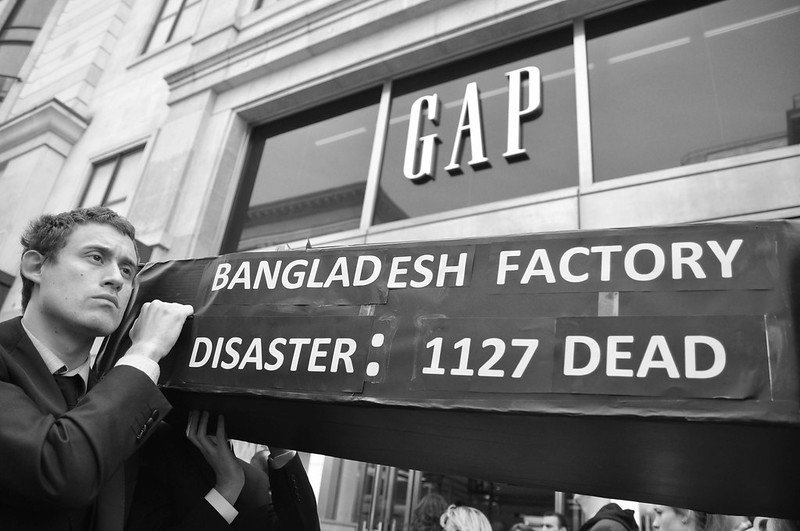 (Image Credit: Flickr account ‘EYE DJ’; the image is at this link. Used without modification under Creative Commons Licence)

Commemorating the suffering of the victims of imperial aggression in the past by using the products, ideas and structures of similar forces in the present merely serves to perpetuate the suffering.

Given the current political climate in Canada, it was only in the nature of things that Prime Minister Trudeau’s Tofino vacation on the inaugural National Truth & Reconciliation Day would cause a debate that was unyieldingly polarized. Within a matter of days, we got to witness the entire process (that I have detailed in my article ‘Structural Dysfunction’) which leads to a state of permanent standstill on matters of policy & politics in our country. But one aspect that I would like to add, and that I didn’t mention in that article, is that once a false / erroneous ‘fact’ gets introduced in our public debates, it never goes away, regardless of how many times it get disproved.

The points and counterpoints that were made in relation to this vacation are too numerous to mention here, let alone to discuss. But broadly speaking, regardless of the direction from which comes to this debate, I think there is unanimity of opinion that the opportunity to focus on the plight of Indigenous people was missed. The main difference of opinion centers around the identity of the person / people who was / were responsible for this failure.

However, my objective in this article is to focus on the people who did spend (or claim to have spent) the day for its intended purpose. This group can be divided into two categories:

Let us discuss both these endeavours.

A few days ago, I stumbled upon a YouTube video of a religious / spiritual nature. It was in Hindi. As a general rule, I don’t consume any content of that nature. But since this video had popped in my suggestions, I was curious, so I clicked on it.

Within about 3 minutes, I shut it down. This was because the speaker / preacher said that the word ‘amal’ (meaning ‘implementation’ or ‘execution’) was synonymous with the word ‘manan’ (meaning ‘contemplation’ or ‘reflection’). I wondered briefly about the kind of misunderstanding that can lead a person to believe that these two words are synonymous.

Then I realized that in many corners, these two words are treated as synonyms.

Question: “What did you do about the National Day of Truth & Reconciliation?”

Answer: “I reflected on Truth & Reconciliation.” (And claimed it proudly on social media, because in my circles, it adds to my prestige / credentials).

Maybe I am being harsh here – or perhaps it is the stage in life where I am at – but ‘reflecting’ falls way too short of ‘doing’. In fairness to the people who made the claim (that they spent the day ‘reflecting’), there are no structures in place where the average individual can pitch in to improve the lot of our Indigenous people – and that is where our systemic failure on this issue lies.

Who can reasonably be expected to create these structures? My answer is that the people who are at the forefront of ‘activism’ on Indigenous issues, whether they are active politicians or not, are the first people who can be held responsible for this task. But unfortunately, we have built a social environment where saying that something should be done is treated as having done something. The rewards for engaging in such talk vary widely. Depending on individual circumstances, it can yield a seat in the parliament, or a media / consulting gig, or the proverbial 15 minutes of fame. At the lowest end of the spectrum, it gets one a bunch of ‘likes’ on social media.

But from the point of view of a person who may genuinely wish for Indigenous people’s lives to improve, there is no mechanism at their disposal where their (possibly small) individual contributions can collectively make a big difference, in the way that (for example) a food bank does. These well-meaning individuals are shackled by the structure created by those enjoying power (whether in a formal capacity or otherwise). Insofar as this structure inhibits individual endeavour, and corrals it into pre-approved, futile activities that don’t change the status quo, it is an imperial construct. I use the term ‘imperial’ here because any activity that is not approved by or serve the interests of the powers-that-be is thwarted. Making meaningful changes does not suit them, so they will use every trick available to them to prevent people from trying to implement those changes.

Let us now turn to the practice of wearing a certain colour that is attached with any particular cause (or similar visible acts to demonstrate allegiance with a given cause).

What strikes me as odd with this practice is that it only feeds the capitalist structures that many (if not most) of the people who adopt the practice are usually vehemently opposed to. Even more importantly, since the latest iteration of globalization kicked in some 3 decades ago, these structures have increasingly relied on exploitative methods that cause untold miseries in the locations where they produce items for consumption in the West. These capitalist forces enjoy the full support and backing of the State, both in their country of origin as well as in the locations where they operate. As these corporations scout the globe for a place where labour and the environment can be exploited for profits, it is necessary to remember that the potentially hundreds of billions of dollars that they ‘invest’ in their production facilities are often conjured into existence from thin air by the Central Banks to aid in the exercise.

I fail to understand how wearing the colour orange helps in addressing the historical grievances of the Indigenous people when the garment in question could have been produced by poor people in faraway lands in slave-like conditions. As I see it, the practice merely causes more exploitation, in the present times. I don’t consider myself (or anyone else) responsible for the wrongs that were committed in the past. But it certainly is very much our duty, at the individual level, to see to it that such or similar wrongs do not get committed in the present. Granted, as the individual consumer, we don’t have much control over the practices of corporate entities, particularly when they enjoy the blessings of the State. But exerting pressure on the political class is an individual responsibility, and more so in a democratic set up. I would even go so far as to say that it is DUTY as well as a RIGHT. The onus of discharging the former and exercising the latter falls squarely on the individual. The first (baby) step in this direction is to question the origins of the garment that we are encouraged to don in order to show our support for a cause.

Ideally, I would like these garments in orange colour to be manufactured by the Indigenous people. If that were the case, I would be willing not only to buy one but also to pay more for it. Sadly, however, most of their communities are located in areas that are severely deficient in infrastructure, so I realize that the idea is moot.

The Real Canadian Superstore (owned by Loblaw’s) has been flying the Canadian flag at half-mast ever since the discovery of unmarked graves near the sites of Indian Residential Schools earlier this year. I have often wondered if they can set up at least one small garment manufacturing facility in a First Nations community to produce orange shirts. They certainly have the resources to surmount any challenges along the way. I remember that they had one facility in the ill-fated Rana Plaza in Bangladesh, where over 1,000 workers died when the plaza collapsed a few year ago; setting up a better one in a FN community would go a long way in public perception of their atonement for the tragedy. But then I also remember that they received $ 36 million as subsidy from the federal government for replacing refrigerators in their stores, in the name of addressing climate change. So, my conclusion is that their participation in the feel-good causes of the day is limited to taking from the Canadian society, and does not extend to giving to it.

That last sentence, unfortunately, applies to a lot of entities, including individuals.

In English, the word ‘karma’ has acquired a specific meaning. In the original Sanskrit, however, it is a much wider term. The concept is pretty complex, and my understanding of it is still developing.

In simplified terms (according to my current understanding), the term ‘karma’ means any act performed out of volition or as a result of choice. How we choose depends on the values and priorities that we carry in our minds, as well as external constraints. The choice also determines who we are as individuals.

When it comes to Indigenous issues, what do we want our defining characteristic to be? Here are the choices as I see them: