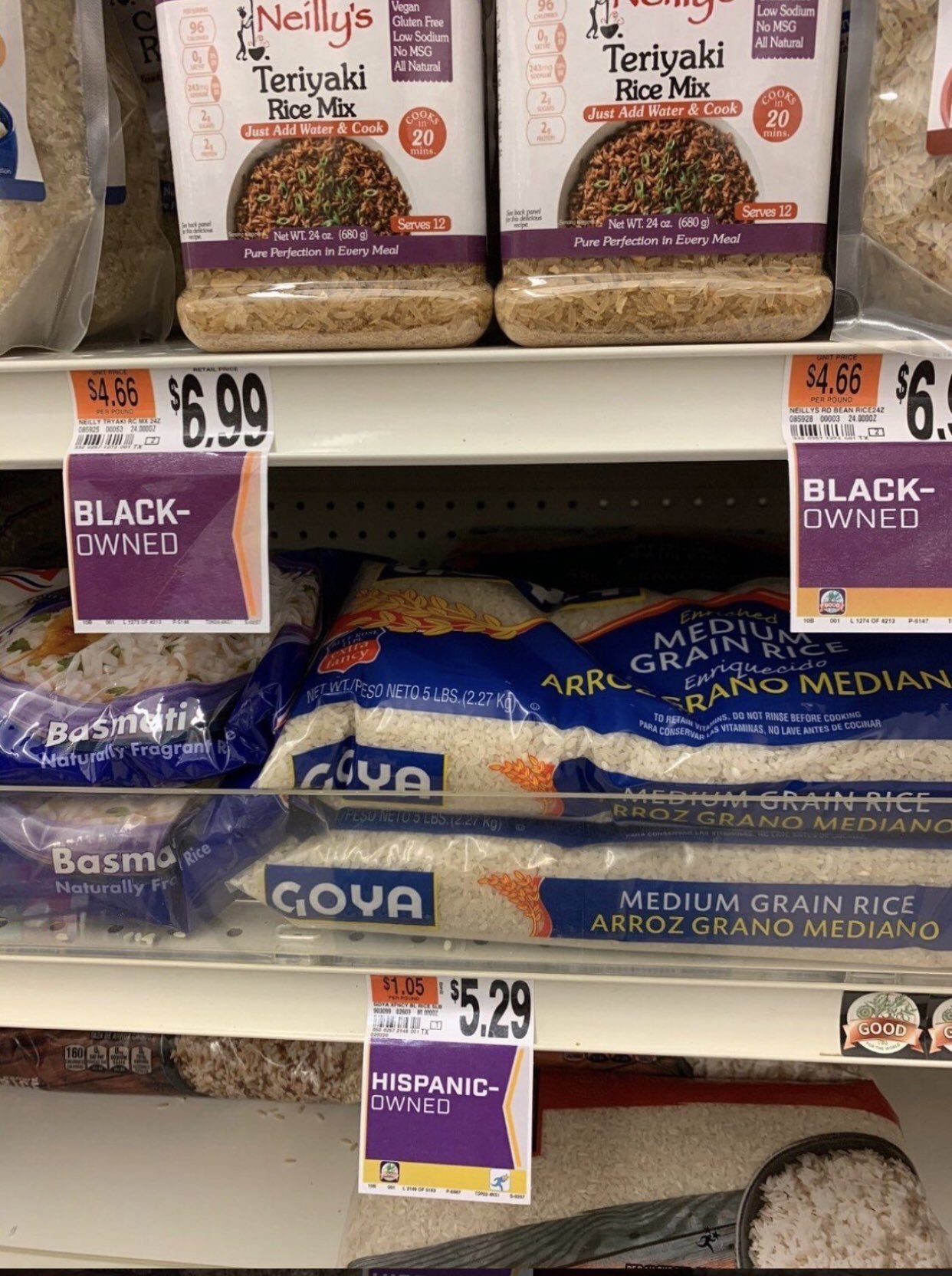 The idea of stores marking a product according to the group identity of its producer is worse than empty virtue signaling, because it actively undermines amity.

Back in September of 2020, Prime Minister Trudeau announced a special program, pegged at $ 221 million, to help black Canadians get business loans. I wrote about this at the time, in an article titled ‘A League Of Their Own’, detailing my reasons for thinking why this was not a good idea. In that article, I wrote:

“The policy institutionalizes the idea that access to a product – any product – can be made conditional to any immutable characteristic of a customer.”

After writing that article, I have been coming across information that some US businesses (typically, large retailers) are putting labels in their merchandise displays, showing the racial or other group identity of the business owner that produced it. Normally, I am against the widely prevalent tendency to drag US issues in discussions about Canada. However, since this development in the US dove-tails into official Canadian policy, I believe I am right in making an exception; I see this growing US trend as the flip side of the earlier Canadian issue. Perhaps the only difference between the two is that in the newer case, the sellers / producers have immutable characteristics that influence the intended outcome of a business transaction.

In the latter half of the 20th century, Indian society tackled similar issues of segregation-by-identity, from the opposite side, in order to remove it. Having grown up in that society, I thought that my familiarity with the issue could be of use in the current Canadian / American context.

When I entered university, I had to commute to the nearby city of Ahmedabad by bus. Traffic used to be slow, and it took about an hour to reach my destination. I tried filling the time by reading, but the uneven roads and the bus’s suboptimal capacity to absorb jerks and jolts made the experience unpleasant, so I fell in the habit of dozing off during my commute. One day, the bus came to a sudden, screeching halt soon after entering Ahmedabad, interrupting my slumber. I peered out of the window to find out what had caused the stoppage. Before I could see the road ahead, my gaze fell on a sign outside a roadside restaurant. The place was a ramshackle affair, with no seating inside; there were a couple of tables and a few chairs outside. By the looks of it, the restaurant was the kind of joint where poor people in a Third World country grab a bite to eat. The sign had been written with chalk on a smudgy black board, in poor handwriting. It said, ‘The cook is Brahmin’. I was stunned.

In the hierarchy of the Hindu caste system, the Brahmin caste is at the very top. Traditionally, it had been a rule that people would not eat food that was made by someone from a ‘lower’ caste than theirs. This had made it necessary to know what caste the cook belonged to. The custom put an automatic limitation on the number of customers a restaurant could serve. Since the Brahmin caste was at the very top, food prepared by them could be eaten by anyone, thus freeing the restaurant from the limitation.

The reason why I was stunned upon seeing the sign was that in the environment where I grew up, this was already an obsolete and discarded custom. As long as the food had been prepared hygienically, nobody cared about the caste of the cook. It had long been understood that these caste-based restrictions were divisive, and abandoning them had the effect of bringing people together. The sight of a sign that openly declared adherence to such an anachronistic restriction was therefore shocking.

WATER UNDER THE BRIDGE

In my ancestral town, there are many temples (naturally). The biggest one – in terms of size, importance and attendance – ‘belongs’ to my clan (in modern times, the ownership has been transferred to a charitable trust; various people from the town serve as trustees and keep a watch on the finances). It was founded by an ancestor of mine, some seven centuries ago. Any pooja (religious service) can only be performed by a one of his patrilineal descendants (although there are some notable exceptions, including when a clan member only had daughters). Each clan member gets a ‘turn’ at this for one year. This member’s family has to live in the temple for the year.

When I was around ten years of age, it was the ‘turn’ of my grandfather. I used to live in a different city with my patents, but we used to visit every now and then for a few days or weeks. On one such visit, I saw some handymen come in and start on the place where drinking water was kept. The arrangement consisted of several large earthen pots on an elevated platform, with a ladle accompanying each pot to fill the ‘glasses’ (these were made of brass, but across India, what we would call ‘cups’ for drinking water are always called ‘glasses’ irrespective of the material they are made of). There were wooden strips on the wall, with brass hooks attached. Each ‘glass’ was hung on a hook. Below the hook, the name of the caste for which the ‘glass’ was meant was written with white paint – tailor, weaver, blacksmith, trader, Brahmin and so on. It was these strips that the handymen began to remove. Initially, I thought that these were just being replaced due to age. But then I noticed that the replacement strips did not have the names of castes written on them. I asked my grandfather if they would be written later. He said no, henceforth, there would be no caste-specific ‘glasses’. Anyone could drink water from any ‘glass’. I asked him why.

For the first and last time in my life, I heard my grandfather use even mildly strong language. “This goddamned thing has been bothering me for a long time. It is way past time to get rid of these divisions”, he said.

“Holdouts from a bygone era”, he had an air of dismissiveness on his face, “They will all be dead soon. Before long, nobody will even remember that there used to be caste-specific ‘glasses’ here.”

When the evening service was about to start, I made it a point to hang around that area. As I had expected, I heard people expressing displeasure at the change. As grandpa had predicted, a majority were of a certain age demographic – but I was surprised to notice that even people belonging to the ‘lower’ castes were among them. However, no one dared to confront grandpa over this sudden change – he was an important man in the town, and one did not incur his wrath easily, especially not in his temple.

A couple of weeks later, we left the town to return to our city. By that time, people had stopped grumbling about the matter completely. Years later, I reflected on the possible reasons, and concluded that the society was probably very nearly ready for the change, and grandpa’s authority had snuffed out any vestigial tendencies to stick to the custom.

The following year, it was someone else’s ‘turn’ at the temple, but they did not reintroduce the caste names, and likewise in the year that followed, and so on. By the time grandpa passed away, it had become ‘old custom’ that anyone could drink water from any ‘glass’.

When grandpa passed away, we had to go to my ancestral town for a few days, for his final rites. One day, my grandmother asked me to go to the house of an old lady who lived alone down the street, as she had fallen ill and needed help. When I went there, the lady told me that she wanted some vegetables to be brought from the bazaar. Handing me the money and a cloth bag, she said, “Don’t buy from the Muslim guy.” I asked her why. She simply repeated that I should not buy from him.

“What if he has better vegetables?” I asked, “Or if he offers a better price?”

She said those things didn’t matter. Just don’t buy from him.

In the bazaar, I found that ‘the Muslim guy’ was selling vegetables of the same quality as the other vendors, at a lower price. I bought from him, and upon my return to the old lady’s house, lied to her about it.

I my view, making it an act of virtue to arrive at one’s buying decision based on the producer’s identity poses many questions. Most of these are capable of tripping us up. For example:

I am sure more such questions are possible, but the key point is this:

Introducing the element of WHO made the product in our buying decision takes us away from economic considerations in economic transactions, and puts us on a divisive track down which we are most likely to crash and burn, as we get bogged down in considering which decision is more virtuous.

To be clear, moral dimensions are not new to economic decisions. Over recent history, we have increasingly made our choices more morally defensible by insisting on things such as protection of workers and the environment etc. (although the old practices of ignoring slave labor and environmental destruction are making a comeback via global supply chains). The issue that I have with the topic under discussion is that we are attaching moral quantification to factors that are beyond human control, such as race etc.

If we liken aggregate demand for a product to a pot of water in my temple, we are basically claiming that there is greater or lesser value in selecting the ‘glass’ that the water gets poured into, depending on the label that identifies the ‘glass’. This situation is the opposite of what grandpa did, which was to remove a practice that was based on divisions. Instead, we are seeing the emergence of a division-based system of ascribing value to our actions. Will we, as a society, remember that once upon a time, what mattered was the quality of the product, its price and if it was made ethically?