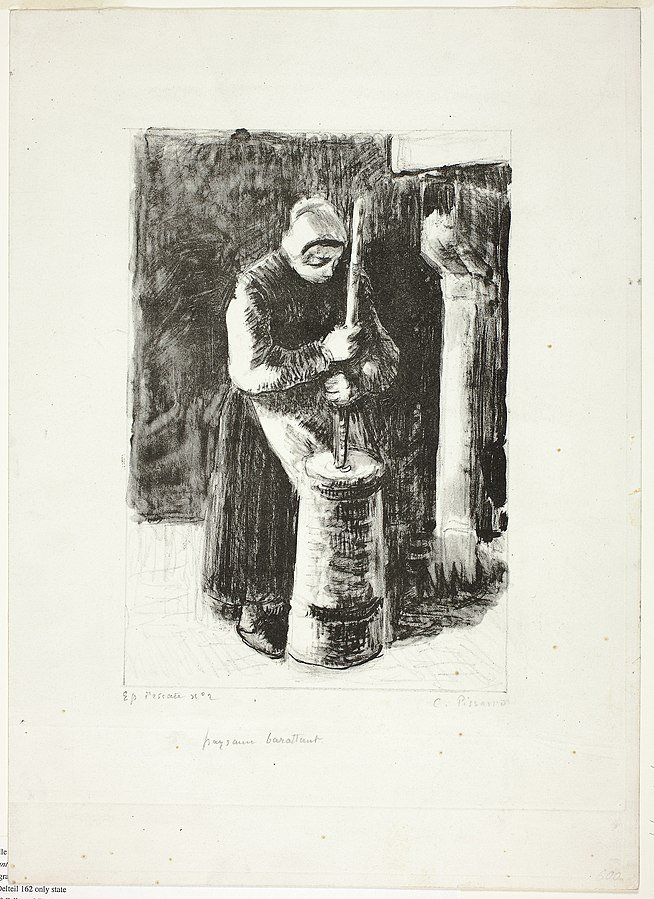 (Image Credit: Camille Pissarro at Wikimedia Commons; the image is at this link. Used without modification under Creative Commons Licence).

Our electoral politics has degenerated to a point where sub-optimal outcomes are the default setting. When you churn milk, the cream rises to the top. But we are churning mud, so everyone gets dirty and no one is happy.

You know an election campaign is well and truly under way when unsavoury details about this or that candidate’s past or rift with their Party start trickling in. And so it happened with the campaign under way right now in Ontario. In fact, the stories erupted in a rapid-fire fashion rather than a trickle: On May 11, it emerged that Education Minister Stephen Lecce had participated in a fraternity house ‘slave auction’ when he was in university, the Liberal candidate for the riding of Parry Sound – Muskoka, Barry Stanley was dropped by the Party as he had published a book ‘detailing scientifically baseless views on homosexuality’ (the report does not say when the book was published) and the Green Party candidate for the Davenport (Toronto) riding Nafeesa Alibhai had quit over a recent statement by her Party relating to the Israel-Palestine situation. The very next day, it was reported that another Liberal candidate, Alec Mazurek (Chatham-Kent-Leamington) was dropped by the Party over his homophobic slur on social media.

The obvious question is, of course, why the respective Parties had failed to spot the problem areas before approving the candidates to run for nomination. In the case of Minister Lecce, a further question is why & how the Conservative Party and the other Parties as well as the media had failed to dig up this disturbing part during the previous election campaign in 2018 (and in the 4 years since, while he was a MPP and a cabinet minister in the Provincial Parliament). In an earlier article in August last year (Nominal Representation), I wrote that:

“Dysfunction and general ineptness in government are often points of complaint from Canadians. But this sad state of affairs is only a natural outcome of the process that brings certain types of individuals to elected office.”

I think the time is now opportune to take a look at the processes that bring this type of individuals to run for elected office.

Perhaps my opinion on the reasons why people get motivated to run for elected office will sound overly cynical to some, but I do not subscribe to the widespread belief (at least as expressed in public, especially in the media) that their sole intention is to serve the public. Once we overcome this hurdle, several possibilities become visible:

In 1927, German physicist Werner Heisenberg came up with his Uncertainty Principle which states, in layman’s terms, that given a set of initial conditions, the more precisely the position of a particle is determined, the less precisely its momentum can be predicted, and vice versa. In the years since I learned about this Principle, I have found that this logic / relationship can be applied to many situations in day-to-day life also. The current topic of discussion is no exception to this.

For a large part, political Parties require their nomination aspirants to be good at (a) signing up new members for the Party (who will presumably vote for the respective aspirant in the nomination meeting) and (b) raising funds for the Party. There are hardly any entry barriers relating to qualifications and merit, and such as they are, there isn’t too much of a focus on ensuring that those are met. As a result, and in light of the motivations that I enumerated above, the whole nomination exercise degenerates into a rat-race among the nomination aspirants of (let’s just say) modest abilities. In the lingo of Human Resources professionals, ‘the talent pool’ isn’t very deep – and their focus on the two ‘deliverables’ turns them into salespeople (for memberships) and fund-raisers with connections to people who can donate significant sums of money to the Party. In the absence of any monitoring by the Parties (and indeed, sometimes, apparently, with their blessings), these aspirants resort to all sorts of unsavory methods that remind me of Third World countries in order to secure a nomination as the candidate for their Party. This bears emphasis: the induction of individuals into the sphere of active politics involves all sorts of shady and unethical practices; expecting them to conduct themselves in an ethical manner afterwards is unrealistic.

The resulting suboptimal situation is exacerbated by two factors:

Back in 2017, I commented on the first factor in an article in a Gujarati publication in the GTA (which I republished in English as my article ‘Drama Behind The Stage’ in March 2021). In that article, I cited the instance of a Liberal nomination meeting for the riding of St. Laurent in Quebec where the total of the votes cast at the nomination meeting was 1,353, which was 1.97% of the total number of voters in the riding at the time. Out of these, the winner of the nomination contest, Ms. Emmanuela Lambropulos, had secured 626 votes, which works out to 0.89% of the total number of voters in the riding. Since this is generally a ‘safe’ seat for the Liberal Party of Canada (it was held by former Minister Stephane Dion until 2017), Ms. Lambropoulos went on to win it as well (also aided by the fact that she was running in a by-election caused by the resignation of MP Stephane Dion, where voters turnout tends to be much lower than a general election) and has won the two general elections that have taken place since her initial win. Curiously, her Wikipedia entry states that “Lambropoulos’s campaign received strong support from the Greek community”. If that is true, then in addition to the ‘brand’ of the Party and its leader plus the ‘safe seat’ aspect, we have ethnic loyalties in the mix as a factor deciding our elections, rather than demonstrated merit / eligibility to serve the public.

The net result of the whole process is that once a parliament is formed, there is little sense of direction – and even less desire – among those elected to actually serve the public. For the most part, their time is spent in twiddling their thumbs and cheering their Party leader with claps or standing ovations (regardless of whether the claps & ovations are justified or not – as reported in this CBC story in November 2018, the Ontario speaker had to actually ask the Conservative MPP’s to stop giving so many standing ovations in the Legislature). Whether we dislike this practice or not is irrelevant. For the MP’s or MPP’s, the first priority is to continue to be in the good books of the Party, its leader and the powers-that-be behind the curtains. The stated motivations for their seeking elected office are relegated to the distant background.

Just as an example, consider the case of Ontario MPP Jeremy Roberts, who was claimed to have been motivated to get into active politics to advocate for the people (especially children) suffering from disabilities. In the 4 years since the last election, the number of disabled children on the waitlist in Ontario has ballooned from the already high 23,000 to well over 50,000. The only ‘claim to fame’ of MPP Roberts that I am aware of is that he tabled Bill 214 that would see Ontario synchronize its Daylight Time with Quebec and New York State. I emphasise here that this is merely an illustrative example; if one had the time and the inclination, one can unearth similar underwhelming performance for nearly all elected officials.

In conclusion, while individuals seek elected office for various reasons – none of which have to do with serving the public – and succeed at the attempt partly due to low public interest in the process that gets them elected, we continue to believe the fiction that they are doing so for the benefit and welfare of people at large. I am inclined to believe that most voters sense this at the intuitive level, and therefore, when news of any aspiring or elected politician’s unsavoury past emerges, there is a short-lived brouhaha – before we settle down to business-as-usual; in trademark Canadian fashion, there is no appetite for bringing about improvements in our politics. If we had some, the churning of our political processes would have been akin to churning milk resulting in the cream rising to the top. This cream would serve us well and make Canada more competitive in an increasingly competitive world. But the material that we start with is mud rather than milk. For me personally, the part that is worse than getting dirty is that a lot of Canadians seem to be enjoying it – or at least enduring it without resistance. As long as there is a critical mass of Canadians enjoying / enduring the status quo, our slide as a society will continue.