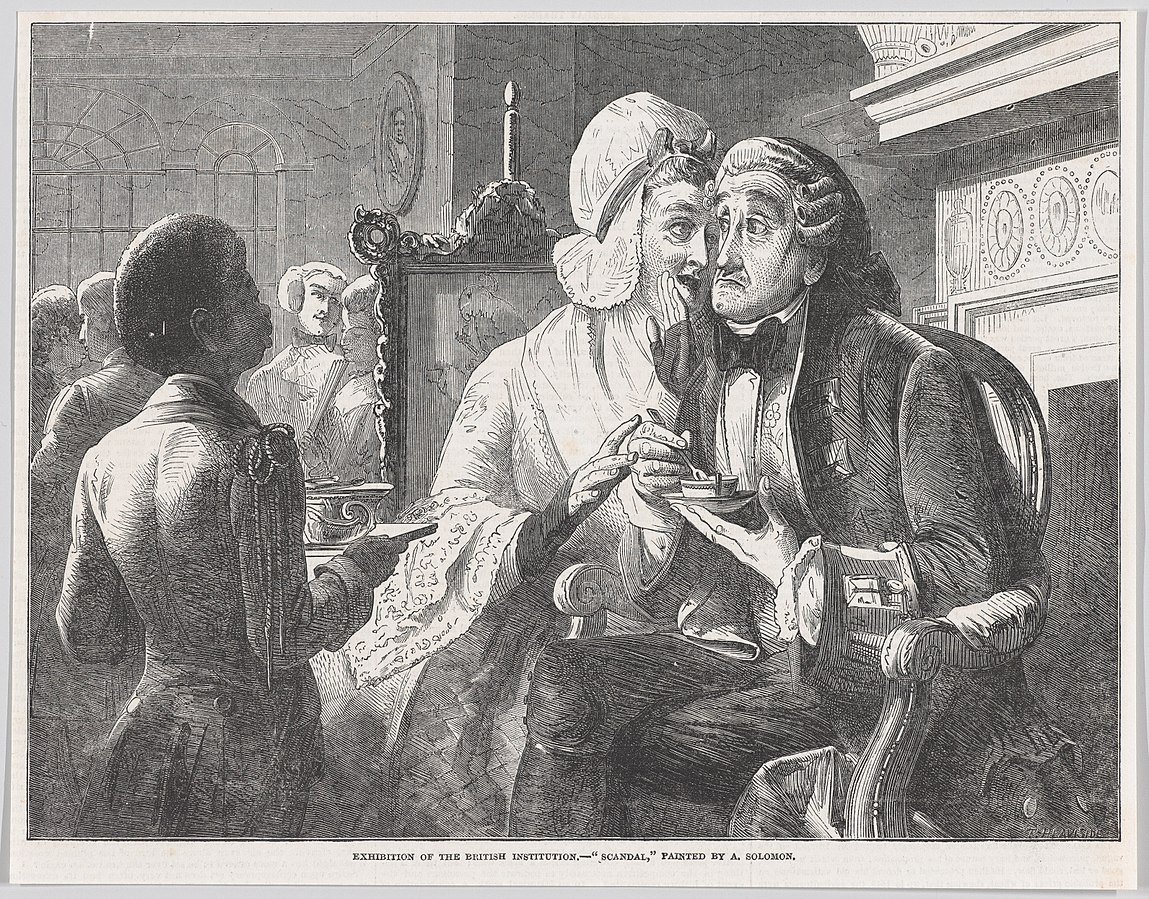 (Image Credit: Creator Thomas Heaviside via Wikimedia Commons; the image is at this link. Used without modification under Creative Commons Licence)

The three main planks in the damage control exercise by the Trudeau government in the CMAC / Laith Marouf scandal are disintegrating in front of our eyes. Will they have to pay a price for this?

In what may seem like a very long time – but is in fact just a few weeks – the official statements emanating now from the Trudeau government on the CMAC / Laith Marouf scandal have started diverging – perhaps even being diametrically opposed to – the statements that they came up with initially. Worryingly – but somewhat unsurprisingly – this divergence has gone largely unnoticed.

The three main points in the hastily formulated damage-control exercise by the government were that (a) the funding for CMAC had been ‘cut’, (b) the selection of CMAC was the result of a ‘vetting process’ that had failed to notice the problematic statements, in public sphere, by Laith Marouf, and (c) CMAC / Laith Marouf have been banned from any further business with the government. Let us see where things stand on these three points now.

THE SMALL MATTER OF MONEY

At the time when Minister Hussen declared that funding for CMAC had been ‘cut’, what remained unanswered was ‘by how much?’. But now we have some clues. A follow-up story on the scandal in the Globe & Mail contained the following: “Arevig Afarian, a spokesperson for Mr. Hussen, said the department is asking for the entire $133,000 back” (emphasis added). This begs the question: If funding was ‘cut’, how is it that the department is asking for the ENTIRE amount to be returned? Shouldn’t the amount that they are asking to be returned be less than $133,000? But this is not the only question – other, more worrisome questions arise out of this one simple statement.

We know that Minister Hussen had been alerted in the matter by his caucus colleague MP Anthony Housefather in July. But Minister Hussen failed to act for several weeks. The Toronto Sun quoted Minister Hussen saying as late as October 7 that “he wished he had condemned Marouf’s ravings earlier but was hamstrung by the bureaucratic process necessary to withdraw a $133,000 grant the government had awarded to Marouf’s (CMAC)” (emphasis added). But as we know from the statement by his spokesperson, the entire amount of the grant appears to have been paid. Once again, the Minister is attempting to throw the bureaucracy under the bus to clean his hands off the mess – but his attempt is feeble and infructuous. The questions still remain.

Was this delay on his part utilized to pay out whatever remained of the $133,000 to CMAC? Was the delay intended to facilitate such payout? Is it conspiratorial to ask these questions? My answer to the last question is ‘No’ – because on a matter as grave as this (i.e., the government using taxpayer money to help someone spread anti-Semitic, racist and hateful messages), it is in the public interest to have all doubts cleared. This is especially pertinent in light of the secretive manner in which the payout of $10.5 million to Omar Khadr was done, catching everyone off-guard – including our allies the USA, where there was / is a great deal of sensitivity on this matter. Who can provide these answers that we can be sure are based on actual facts, and not the product of another politically motivated damage-control exercise? Should the Auditor General be tasked with finding this out? Perhaps we need a forensic audit of the whole deal with CMAC?

In any event, it seems clear as daylight that Minister Hussen’s statement about the funding to CMAC having been ‘cut’ was patently false. It is also equally clear that he either knew or should have known that the entire amount of $133,000 had been paid by the time he made his statement that funding to CMAC had been ‘cut’ (this is assuming that no payment was made to CMAC after he made the statement; if it was, that would be even more worrisome and a scandal in its own right). Why, then, did he make the statement? Given his failure, willful or otherwise, to present a true picture to Canadians, is he fit to continue in his office as a Minister of the Crown? Will our media hound him the way they hounded Senator Duffy for his travel and housing allowance expenses claim? As we know, Senator Duffy was suspended without pay for 2 years even though he was ultimately acquitted of the criminal charges that were laid on him for the issue. In light of that, what consequences should Minister Hussen face?

When Minster Hussen brought up the ‘vetting process’ (I prefer to say that he ‘kept harping on it’, as opposed to ‘bringing it up’ – but your view may differ), he was relying on the mental imagery that people associate with ‘vetting’. When we hear the term ‘vetting’, we envisage a process where a number of people voluntarily become candidates for a certain opportunity, and then the person selecting the candidate goes through relevant details regarding each candidate before arriving at their choice. In other words, in ‘vetting’, the direction of approach is from the candidate to the selector. But now there is reason to believe that in the case of CMAC / Laith Marouf, the direction may have been the opposite.

As Mark Goldberg revealed on October 7 via his tweet (quoting an article in the Arabic publication Annasher on September 22, 2022), it was the Ministry of Heritage that approached CMAC to submit an application WITHIN 4 DAYS OF CONTACT  – even though there were no ‘funding packages available’ to CMAC to do so. The translated paragraph is definitely worth a read, and if the claims in it are true, may prove to be invaluable in debunking the defence that ‘the vetting process failed’ – because there was no vetting done at all, and therefore no question a ‘process’ having been in play”:

At this point, the natural question that arises is why Heritage Canada would have needed to do so. Having had a close-up view of – and intensive interactions with – bureaucracies, I am willing to hazard a guess as to the answer: the reason why Heritage Canada, when under pressure to come up with something to satisfy their political bosses, ‘dumped’ the job and the money on CMAC was because CMAC was already ‘in the system’. As we know from previous reporting, before this assignment, CMAC had already been involved with the implementation part of government policies to the tune of roughly half a million dollars. Public servants knew Laith Marouf – or knew about him – already, and in an emergency situation, reflexively reached out to CMAC. This is how governments & bureaucracies operate – which is why many people are so eager to gain ‘the inside track’ of government contracts. Bureaucrats especially dislike the unknown; they prefer to deal with known parties to the point of obsession. So, once someone has penetrated the outer barrier, they keep getting government business as a matter of routine expectation – on both the sides. They are further assisted in this by the fact that the outer barrier is difficult to penetrate, and one usually requires political patronage to overcome that difficulty. This adds another element to their relationship with the bureaucracy – the public servants know that the individual has the blessings of so-and-so politician.

Therefore, all the talk by Minister Hussen about the ‘vetting process’ (both in terms of how it failed, and how they will strengthen it) is, in my opinion, utter baloney; it didn’t ‘fail’, and such ‘mistakes’ will always happen. And while these personal connections are always hard to prove, the paragraph quoted above gives a lead (at the very least) for further investigation. A forensic audit would reveal what actually transpired.

One of the assurances that Minister Hussen gave to Canadians was that CMAC (along with Laith Marouf) would be banned from receiving further business from the government. This pledge appears to be shaky now; in the Globe & Mail article cited earlier, CRTC spokesperson Patricia Valladao is quoted as saying that “As an administrative tribunal, the CRTC holds public proceedings. Anybody can participate in them… It would be inappropriate for CRTC to establish list of parties that may or may not participate in its proceedings.” On a slightly pedantic note, one assumes that the reference to ‘anybody’ here means Canadians and Canadian groups, companies etc., and not any foreign individuals, groups or companies etc.

As for the second part of that statement, it is possible to create a list of a whole host entities whose participation in CRTC proceedings (if allowed) would lead to howls of protest and unending barrage of attacks from both political and media circles. Therefore, the statement does not hold up to scrutiny.

Regarding the first part of the statement, at first blush, it may seem innocuous enough – an administrative body lets all interested individuals, groups and other entities to ‘participate’ in its proceedings without reservation. But there is a catch – and an important one at that: the G&M story also notes that “(CMAC) has been paid more than $500,000 for taking part in CRTC proceedings since 2016. Most of the payments came from the Broadcast Participation Fund, an independent body set up by the CRTC to pay for public interest groups’ PARTICIPATION in these proceedings” (all emphases added).

So, on one hand, we have Minister Hussen assuring us that CMAC / Laith Marouf have been ‘banned’ from receiving further assignments / taxpayer money any further, and on the other hand, we have CRTC telling us that they cannot prohibit ‘anybody’ from ‘participating in their proceedings’ (for which they may be paid – from taxpayer money, of course). Canadians deserve an answer as to who is telling the truth here.

As I wrote in my earlier article on the CMAC / Laith Marouf scandal (‘State-Sponsored Hatred’), the root cause of this sorry chapter in Canadian history is the ideological zealotry that permeates the Trudeau government. I also wrote, in the concluding part of that article, that the only way to remedy this zealotry is if the voters threaten to punish the zealots at the ballot box for their excesses. The only way to get the politicians to realize that they are on a wrong path is by depriving them of the ‘dopamine hits’ that they get by preachifying from a pedestal. But the market for ballots is a competitive one, and the other competitors will have to convince the voters (or at least enough of them) that if elected, they won’t allow such shameful acts to be perpetrated in their (i.e., the voters’) names. In other words, ending this disaster of a situation is in the hands of BOTH the voters and the political competitors of the Liberal government. It will be fascinating – in a dread-inspiring way – to watch if both the sides are able to rise to the occasion. If State-sponsored hatred recurs after the CMAC / Laith Marouf scandal, it will be the collective fault of our society, and we will have truly earned the epithet ‘systemically racist’.