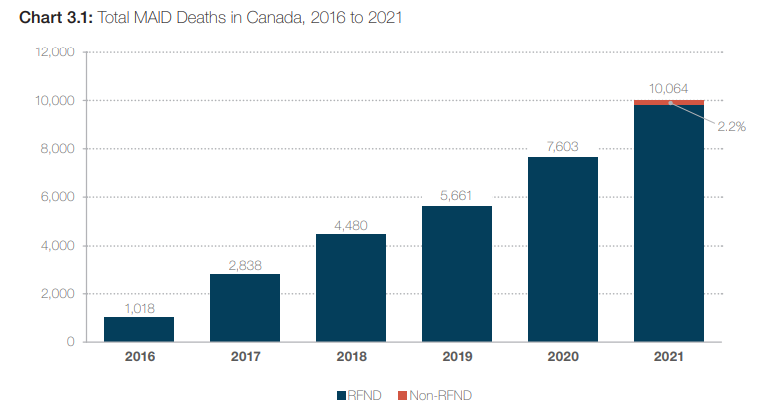 (Image Credit: Third Annual Report on Medical Assistance in Dying in Canada, 2021, published by the Government of Canada. The chart is on Page # 18 of the Report at this link.)

The explosive growth in assisted suicides in Canada should be a matter of concern. Instead, we are carrying on as if this was a good thing. We need to reconsider the issue before things go out of hand.

Over the past few weeks, a low-intensity discussion has been going on about the fact that in 2021, a little over 10,000 people were given medically assisted death in Canada. Such neatly round numbers hold a special significance in popular imagination, so usually these thresholds being met / crossed causes a lot more debate than has happened in the case of MAiD (Note: I believe that the term ‘assisted suicide’ is more apt for these deaths, but will be using the acronym ‘MAiD’ here in the interest of brevity’).

In particular, the lack of interest from the Mainstream Media in exploring the issue beyond the initial bare-bones reporting is disappointing – although I suspect that it will be unsurprising to many. When something as serious as MAiD registers a 989% increase in a short span of 5 years (as it did between 2016 and 2021), we are entitled to expect at least some investigative reporting from a media that, to a substantial extent, owes its continued existence to us the taxpayers. What is behind this sharp increase? Is it because there was so much latent ‘demand’ for MAiD (if we can use such a dispassionate word for something as serious as a desire to end one’s life) which we didn’t know about before it became legalized in 2016? Or is it that the easy availability of MAiD is causing its own demand? In this article, I intend to analyze the published, official information in order to arrive at some conjectures as to the answers – and where we may possibly be headed to as a society.

In addition, in 2021, MAiD availability was expanded to individuals whose death was not reasonably foreseeable (for details on how this came about, see my earlier article ‘… And Euthanasia For All’). In dry bureaucratese, these two categories are acronymized as RFND (Reasonably Foreseeable Natural Death) and Non-RFND. As a result of this change in legislation, Non-RFND MAiD ‘provisions’ appeared for the first time in 2021 data, at 219 (which is about 2.2% of the total). It is anybody’s guess as to whether this category (Non-RFND) will also witness the kind of hypersonic growth that has occurred in RFND numbers as well – but my guess is that it will. As a result, the overall increase in MAiD ‘provisions’ is likely to continue at more or less the same pace that we have seen in the past 5 years.

Equally significantly – but perhaps not surprisingly, in light of the preceding discussion – MAiD deaths have also been increasing as a percentage of the total number of deaths (this data is also on Page # 19 of the Report). Specifically, they were 2.0% of the total in 2019, 2.5% in 2020 and 3.3% in 2021. Provincially, the highest percentage is (unsurprisingly) in B.C., at 4.8%, followed closely by Quebec at 4.7%. What this means is that ‘Death by causes other than MAiD’ is declining as a percentage of the total number of deaths as compared to MAiD. The natural question is, what are the factors prompting people to opt out, where possible, of those other causes? Given that over 75% of the recipients of MAiD in 2021 had only one main condition (see Page 24 of the Report) rather than multiple conditions compounding their suffering, it is worth exploring as to what external considerations (outside of the medical one) may have prompted their decision.

On Page 26, the Report lists the causes of suffering of those who received MAiD in 2021 (Note: The percentages don’t remain within the 100% bound, as multiple causes can be at play for each single individual);

I don’t wish to insert my opinion here, and certainly wouldn’t want to impose it on the persons considering MAiD or pass judgement on those who have chosen it already, but the obvious question is how many of these causes are remediable? Are these factors becoming relevant because of our failure in alleviating them? Maybe we are doing all that we can – via our government, mostly – but at a minimum, the question needs to be explored. To put it bluntly, are people choosing to die because we failed to support them? In addition, the cause that I put in bold font above (Perceived burden on near & dear ones) needs to be examined separately; I shall return to it shortly in a separate article. For the moment, it will suffice to mention that advocates for disability rights have long been opposed to offering MAiD to disabled people; for example, see this CBC report from November 2020 and this prior report from January 2019 on the website angelusnews.com.

On Page 27 of the Report, we learn that among the MAiD recipients in 2021, the number of ‘Persons who required but did not receive disability support’ was a relatively low 179 (or 4.2% of those who required such support). However, the ‘Unknown’ category in this set of data is 1,968 (or 19.8%) – so we don’t know exactly how many people actually required this support but did not receive it. Potentially, 1 in 4 people in the MAiD regime aren’t receiving the disability support that they need. I believe that data on this score needs to be more pin pointed; leaving almost a fifth of the total number in a vague category of ‘Unknown’ is undesirable – and sufficient to undermine public trust in the MAiD regime.

Going beyond that immediate argument, I see a substantial potential for ‘moral hazard’ here. The delivery of support services for disabilities is mostly the function of the government. If or when it fails to provide these services sufficiently (or efficiently), the Canadians suffering from disabilities would be driven to desperation, which would cause them to choose death instead of continued suffering. This may be too macabre an expression for some people, I will say it nonetheless: by offering MAiD to persons suffering from disabilities, the government may have ended up creating room for literally burying its failures. I don’t think any amount of talk about ‘safeguards’ is going to suffice to eliminate this moral hazard.

On the same page, we separately see that 201 recipients of MAiD in 2021 did not have palliative care accessible. While this wouldn’t change the numbers in terms of the outcome, what this tells me is that our systems are falling short of the goal of making the death of such individuals as painless as possible, turning the entire rationale for MAiD on its head for these cases. Additionally, the ‘Unknown’ category here includes 244 individuals. The two numbers combined make up 4.58% of the total. In other words, nearly 1 in 20 individuals who were given MAiD did not receive, or possibly did not receive, the palliative care that they needed.

Page 40 of the Report provides data for MAiD requests in 2021 and their outcomes. According to this data, 231 individuals withdrew their request. Unfortunately, there is no bifurcation of this number into RFND and Non-RFND categories. I believe that it would be better to report these two numbers separately, so as to have a better control on the MAiD regime as it applies to Non-RFND requests; we can audit this number to analyze if the individuals are being attracted prematurely to the idea of availing MAiD.

The same Page 40 also tells us that out of the 12,286 requests for MAiD received in 2021, a total of 487 were deemed ineligible (or 4.0% of the total). The reasons for these cases being denied MAiD alert us to the dangers of MAiD in terms of how individuals may be inclined to avail it prematurely:

Another ambiguity in this data is the ‘Not Assessed’ category. What does that mean, and why is it considered not necessary to assess a MAiD request for any given assessment factor? The highest percentage of MAiD requests that were deemed ineligible and which were not assessed is for the factor ‘Informed Consent’ (23.2%). I would love to gain better understanding of this from a professional point of view: How is it that in 113 MAiD requests, it was not considered necessary to find out if the individual requesting it was doing so with informed consent? Shouldn’t that be the VERY FIRST point of inquiry? Given that in another 101 requests, informed consent was found to be lacking (the above-mentioned 20.7% in the above list), this is a potential red flag for me.

As a layman, my takeaway from the above data is that for whatever reason, many people are forming an inclination to opt for MAiD when it is not their only, last option. If we combine the number of requests denied (487) with that for the requests withdrawn (231), the total (718) represents 5.84% of the total requests received in 2021 (which were 12,286). In other words, 1 out of every 17 MAiD requests was later adjudged – either by the physician or the individuals themselves – to have been the wrong choice. Without taking away the right of any individual to make their own decisions, that high ratio does cause concern. Is there a way to lower it?

As we have seen over the series of articles that I have written on MAiD (this is the 6th one), there are many, many questions on which a wide debate needs to happen before we expand that regime. But that debate isn’t happening, and the expansion is proceeding apace. That regime is in its nascent stage as yet, so we still have some time to involve Canadians from a cross section of our society to arrive at answers to these questions. Perhaps it may be unrealistic to hope for 100% unanimity of opinion on a matter as serious and emotionally charged as death, but we can at least aim for an arrangement that is acceptable to as many Canadians as possible while avoiding causing harm.