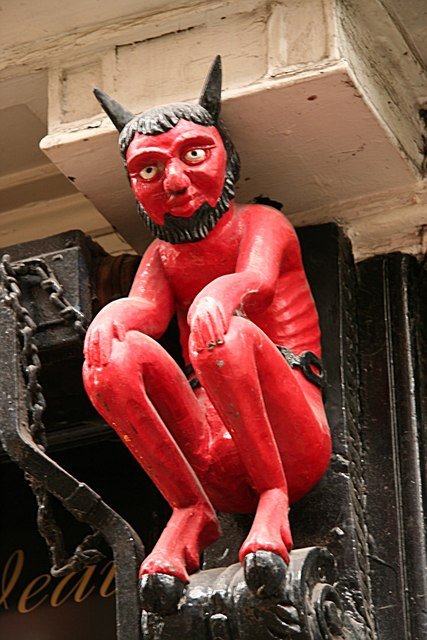 (Image Credit: ‘Printer’s Devil’ by Richard Croft, via Wikimedia Commons; the image is at this link. Used without modification under Creative Commons Licence)

A combination of (a) courts applying a narrow bandwidth of reasoning and (b) legislation blindly following court verdicts has left important holes in our MAiD policy. These holes will haunt us in the future.

When I wrote my first article on MAiD a couple of months ago, it was in response to a report by CBC from 2017 which had somehow resurfaced on social media as a hot topic. Frankly, I had thought of that article as a ‘one and done’ situation. But the dialogue that followed subsequently – including articles by Rupa Subramanya and Ben Woodfinden, plus anecdotal reporting by the mainstream media – ended up in getting me to write a series of articles on MAiD, each of them covering a separate aspect of this complex debate.

The important point here is that much of what I have written on the subject so far has been the result of interactions with people online – we may call it a microcosm of the ‘societal process’ that I have been harping on in my articles on MAiD. But the astonishing part here is that in the circles of power, there appears to be zero appetite for a societal process in relation to MAiD. I am convinced that legislation enacted without the benefit of any societal process – the Canadian version of Central Planning, if you will – is bound to cause a lot of grief in the future, because it will have failed to account for the myriad types of scenarios that are part and parcel of life.

A society-wide process of consultation and inputs would, of course, produce a lot of questions to ponder on this (literally) life-and-death matter. In this article, I wish to focus on just three questions that have emerged from the ‘mini version’ of the societal process in which I am the unwitting – or perhaps self-appointed – fulcrum.

Let us look at the very beginning of this uncomfortable journey – the Supreme Court decision in the Carter case. As a side note, it is (once again) astounding that in the 7 years since the verdict, the point that I am about make hasn’t surfaced in what passes for our public debate. Here is my syllogism resulting from that verdict:

Let us now take a hypothetical example to see how this may, er, complicate matters a bit. Suppose a person dies, leaving behind a note (perhaps on their computer or other device) or even a video recording, that they had chosen to end their life AND had sought assistance from another (named) person for the purpose. Suppose further that the deceased had issues around their physical or mental health that would have, prima facie, made them eligible to seek assisted dying under the MAiD regime. How can we make sure that the note is legitimate, the person indeed did wish to die, and that the other, (named) person who admits to having assisted them in the exercise didn’t actually murder them?

Is the above scenario far-fetched? Perhaps it is. But let us not forget that just a decade ago, ‘assisted dying’ was also considered impossible. It is crucial to bear in mind that the prevailing mood in the society on a whole host of matters changes over time. Moreover, the case law on this issue over the past 7 years shows a gradual but relentless expansion of the types of circumstances under which Canadians are able to choose to end their lives. If these boundaries are extended sufficiently, it may sometimes become difficult to tell whether ending their lives was their voluntary decision or not.

Separately, there has been a development in Europe that has the potential to add to any uncertainty that may already exist. As the Scottish Daily Express reported on November 6th, one Doctor Philip Nitschke, also known as ‘Dr. Death’, has created a do-it-yourself ‘death pod’. Even more worryingly, this device is reported to be 3-D printed. Ideas like this are bound to make a complete mockery of any ‘safeguards’ that the authorities may fondly imagine they are building into the MAiD regime. Enterprising – and well connected – people may even start the 21st century version of the infamous ‘speakeasies’. In 2021, out of over 12,000 MAiD requests received, 487 were denied. What if the requester is unhappy at having been denied? The easy availability of MAiD – whether real or perceived – may have unleashed a demand for assisted dying, and where there is unmet demand, supply is bound to show up.

The great 20th century novelist Frederick Forsyth starts his novel ‘Devil’s Alternative’ with just one line on the first page: “Whichever way I choose, men are going to die.” If we are able to ignore the language that would be deemed sexist in current times – it may perhaps even be considered transphobic – this sentence perfectly encapsulates the medico-legal situation in Canada. In my earlier article ‘… And Euthanasia For All’, I made an observation that I haven’t seen anyone else in Canada offer so far: “The prevailing judicial wisdom in Canada is that the government is allowed to violate our right to access healthcare, but it is at the same time obligated to uphold our right to access death.”

Even as the author of this statement, I did not realize that the person whose right to healthcare is violated and the person whose right to access death is upheld could very well be the same individual. In the considerable wisdom of the courts, an individual ending their intolerable pain by accessing private healthcare violates ‘fundamental justice’, but the same individual ending the same pain by accessing death somehow serves ‘fundamental justice’. This is obviously ludicrous to anyone who is not steeped in the Canadian legal system. The reason why this defective ‘logic’ is able to prevail is simple: Our healthcare model is premised on envy, such that if people with greater financial means are able to exercise greater control over the accessibility of healthcare for themselves, it is considered undesirable for the society at large. But the crucial logical error here is to think of healthcare accessibility as a fixed quantum; the idea that the pie could be made bigger is alien in this paradigm.

When the pie is limited in size and kept (artificially) from growing bigger, it is inevitable that at some point, cost-cutting would become part of the discussion. This would be unthinkable for most people, but it is equally inevitable that in a bureaucratic setup, substituting death for healthcare would be seen as a perfectly reasonable idea to explore. In fact, this idea has been around in Canada since 2017 (see my earlier article ‘For A Few Dollars Less’ for details). The real question is how far the healthcare system could go to make the switch from providing healthcare to providing death. Or, to put it more aptly, how far it would not go to ensure timely delivery of the needed healthcare, such that the patient is driven to choose death in order to end the suffering.

Naturally, expressing doubts of anything less that 100% commitment from the community of medical professionals is bound to attract howls of protest and condemnation. But in our healthcare system, the issue is not one of intention but rather that of systemic inefficiency. I have written a series of articles on this, and in one of them (‘Control Matters’), I have cited the case of a 78 years old patient in Manitoba who had been on a waiting list for spinal surgery for nearly 4 years, as of April 2022. If this patient, who feared that he was going to die in pain, were to choose MAiD, the waiting list would become shorter by 1, and everyone would hail it as a success. In a nutshell, MAiD has the potential to become an escape hatch for our teetering healthcare system to (literally) bury its failures.

As we saw in my previous article ‘MAiD Numbers Up By 989% In 5 Years’, out of the 10,064 MAiD ‘provisions’ during 2021, 35.7% (or 3,593 patients) had listed ‘Perceived burden on family, friends or caregivers’ as one of their reasons for requesting MAiD (see Page # 26 of the Report at this link). On the other hand, out of the 231 patients who had withdrawn their request during 2021, some 7.4% (or 17 patients) cited one of their reasons as ‘Family does not support MAiD’ (see Page # 37 of the Report). Clearly, there is some gap between the perception of patients regarding their being a burden on their near & dear ones, and their desire to factor in their families’ negative views on MAiD.

Here it is pertinent that the ‘Non-RFND’ category (where the natural death of the patient is not reasonably foreseeable) came about only towards the end of 2021. Together with the inclusion of MAiD requests for mental illness in Match 2023 and proposed expansion of MAiD to ‘mature minors’, this gap is likely to widen. There are no signs as to whether anyone is thinking about this – let alone construct the needed ‘guardrails’ to prevent any tragedy.

As a friend suggested recently, MAiD is one issue where the government can justifiably use the Notwithstanding clause in order to enable a wider discussion of the many questions that exist. Ever since I started digging in this issue, I have felt that the approach in government was to hurry up & comply with the various court verdicts. At the risk of repeating myself, I must emphasize that laws are supposed to reflect a broad agreement among the people, and the courts’ task is to interpret the laws (in case of ambiguity) and adjudicate (in case of conflict between the claims of different parties). Instead, what we have on our hands is a case of the courts dictating what the laws should be. Instead of declaring a moratorium, via recourse to the Notwithstanding clause, and doubling back to find out what the people desire, the government / parliament is doubling down on pushing the legislation through regardless of what the people want. There are ample number of examples in history to tell us that this approach doesn’t end well for societies.