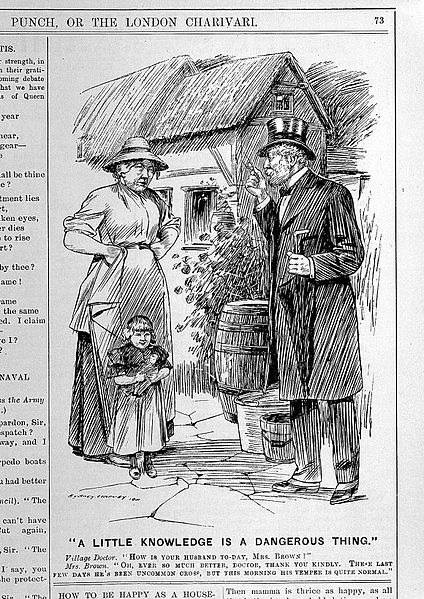 (Image Credit: ‘A Little Knowledge is a Dangerous Thing’ from Wikimedia Commons; the link is at this link. Used without modification under Creative Commons Licence)

One (of the many) sources of our problems as a multicultural society is that we haven’t yet understood the multiple cultures that exist here – but nonetheless have firm opinions about them on which we feel impelled to act.

A few days ago, a good friend of mine drew my attention to a conference called ‘Dismantling Global Hindutva’, taking place on the 10th of September, 2021. Given the times we are in, it is an online conference, and is sponsored by various universities in North America including the University of Toronto, York U and McMaster U. The organizers of the conference and the various speakers appear to believe that Hindutva is a major global threat at present. My friend was of the opposite opinion – that the conference, and the message that it wants to spread, is a threat to peace & harmony in Canada.

I normally stay away from certain topics that involve the South Asian community in Canada, as I believe that taking a stance on any of these may result in me being seen as a partisan by people who may not agree with that stance. However, there are times when refraining to voice an opinion is the greater evil, and I do take a clear, publicly stated position.

For example, in 2018, when the federal government issued a report on the security threats facing Canada, I disagreed with the inclusion of the Sikh-Canadian community in the list of threats, and stated it publicly on my radio show (and the shows of my colleagues at the radio station). Having a lifetime of experience in preparing and receiving reports (albeit in a business setting), I had the following objections:

My takeaway from the report was that it was harmful to the relations between two segments of the South Asian community; one segment was being told to be fearful of the other, without being told why. Given the machinations usually associated with politics, this may have been intentional.

The key point here is that whether this was intentional or inadvertent, the people who produced the report paid no price for it. The sad part is that this perfectly routine.

Having agreed to make one more exception to my usual practice (of staying away from issues specific to the South Asian community), I was, perhaps for the first time ever, able to focus on the word ‘Hindutva’. I had been hearing the term for some three decades without pondering the structure of the word. I suppose this is also perfectly routine – we hear a word for the first time, associate a meaning with it depending on the context, and then convince ourselves that is what the word means. This had happened with me as well in this case.

Fortunately, I had formal education of the Sanskrit language in high school, so I was able to try and process the mechanics involved in regard to the word ‘Hindutva’.

In Sanskrit, the suffix ‘tva’ is added to nouns / adjectives to indicate ‘having the characteristic of’.

For example, the word for ‘large’ or ‘greater’ is ‘guru’ (its popular usage in the English language is a case of applied use of the original meaning; a ‘guru’ is someone who knows more that the student, and therefore has a greater stature).

From this, we get the word ‘gurutvakarshan’ (gravity), the characteristic of larger things to attract something that is smaller in comparison (‘akarshan’ means attraction).

Similarly, the word ‘prabhu’ (usually used to mean ‘God’) actually means ‘master’ or ‘a person in command’. Hence, ‘prabhutva’ means having mastery or command over something. For example, mastery over language is ‘bhasha prabhutva’ (‘bhasha’ means language).

So, according to the structure and rules of the Sanskrit language, ‘Hindutva’ means ‘the characteristic / state of being a Hindu’.

It therefore follows that ‘Hindutva’ is an inalienable part of being a Hindu.

‘Hindutva’ cannot be ‘dismantled’ as long as there are Hindus.

In recent years, however, the word ‘Hindutva’ is presented in a context that ignores the above foundational reality. Can a word be accorded a meaning that materially, and indeed diametrically, deviates from its original meaning?

While it is true that languages evolve all the time, should that evolution be deemed to include assigning new meanings to words that are completely at odds with their original meaning? Because that’s what is happening with the word ‘Hindutva’ here, and that is the reason why I said ‘diametrically’ above. At the core of Hindu philosophy lie the tenets of inclusion, pluralism and tolerance (among others). Pointing to things that aren’t among these tenets and claiming that they, singly or in conjunction, amount to ‘Hindutva’ is not just morally offensive but also defies common sense – because ‘Hindutva’ is the exact opposite of those things.

At the practical level, the application of this twisted meaning of ‘Hindutva’ becomes even more problematic. If it is meant to be ‘dismantled’, how are people supposed to go about carrying out the ‘dismantling’? There is no outward difference between what the proponents of this ‘dismantling’ call the ‘right’ type of Hindu and the ‘wrong’ type. The distinction must therefore be made based on observation of behavior. Does everyone have the mental resources to observe and deduce the conclusion? In the North American context, the answer is a resounding ‘NO’ for the vast majority of the population.

It is a cardinal rule of Deductive Logic that if one’s premise(s) and processes are faulty, the conclusion is bound to be wrong – barring exceedingly rare chance.

In other words, by priming the Canadian population up for ‘dismantling’ Hindutva, we would be setting them up for internecine clashes.

In this context, it is worth remembering that following 9/11, several vigilante attacks were carried out in the US on Sikhs (some Sikhs were also killed, sadly). This is a glaring example of what I am discussing here – a population that was primed for action (via propaganda) against one group was nevertheless incapable of distinguishing between two similar-looking groups, and arrived at a wrong conclusion. (This is NOT to suggest that such attacks against Muslims would have been pardonable at all; the key point here is the vast gap between desire and ability).

I couldn’t help noticing that many of the speakers at the conference have Hindu names. Do they bring credibility to the idea that ‘Hindutva’ (in its modern, twisted meaning) is something worth ‘dismantling’?

The answer is in two parts:

In a nutshell, therefore, determining whether ‘dismantling global Hindutva’ is a worthwhile idea shouldn’t and mustn’t depend on the identity of the speakers or other participants, organizers etc. The idea – like any other idea – must be judged on merit and facts.

One argument that I have seen regarding this conference is that it amounts to free speech, and as universities are wedded to that idea, they are justified in not just providing space for it but also sponsoring it.

The idea of free speech has merit. I firmly believe in free speech, including speech that may be offensive.

However, the issue here is not ‘offensive’ speech per se, but rather speech that is likely to cause actual harm. In this regard, let us not forget that various Canadian universities have, in recent past, cancelled or outright refused to hold (or allow to be held) events that they determined would lead to harm being caused to specific groups. So, it is clear that they are well aware of the limitations of the concept of free speech.

Therefore, it can be said with confidence that universities are applying a dual standard here. It wouldn’t be proper to speculate as to their reasons for doing so, but what can be said with conviction is that they appear to be more concerned about harms being caused to some groups compared to others.

A lot of Hindus justifiably fear that if this conference is allowed to proceed (and be sponsored by universities), they and their children will be threatened. But the threat does not stop there. Weakening selected groups, and creating fear about other selected groups, is a standard method in pursuit of the policy of ‘divide and rule’. With immigration, the population of Canada has become more heterogeneous. This at once makes the society harder to control and easier to manipulate; the manipulation aids in exercising control.

Therefore, I see it happening that the bogeyman of ‘dismantling Hindutva’ will eventually weaken Canadian society at large. One by one, each identifiable segment will become a target – all in order to increase the control of the powers-that-be. So, it is incumbent on all Canadians to resist and reject this divisive force, in their own self-interest.