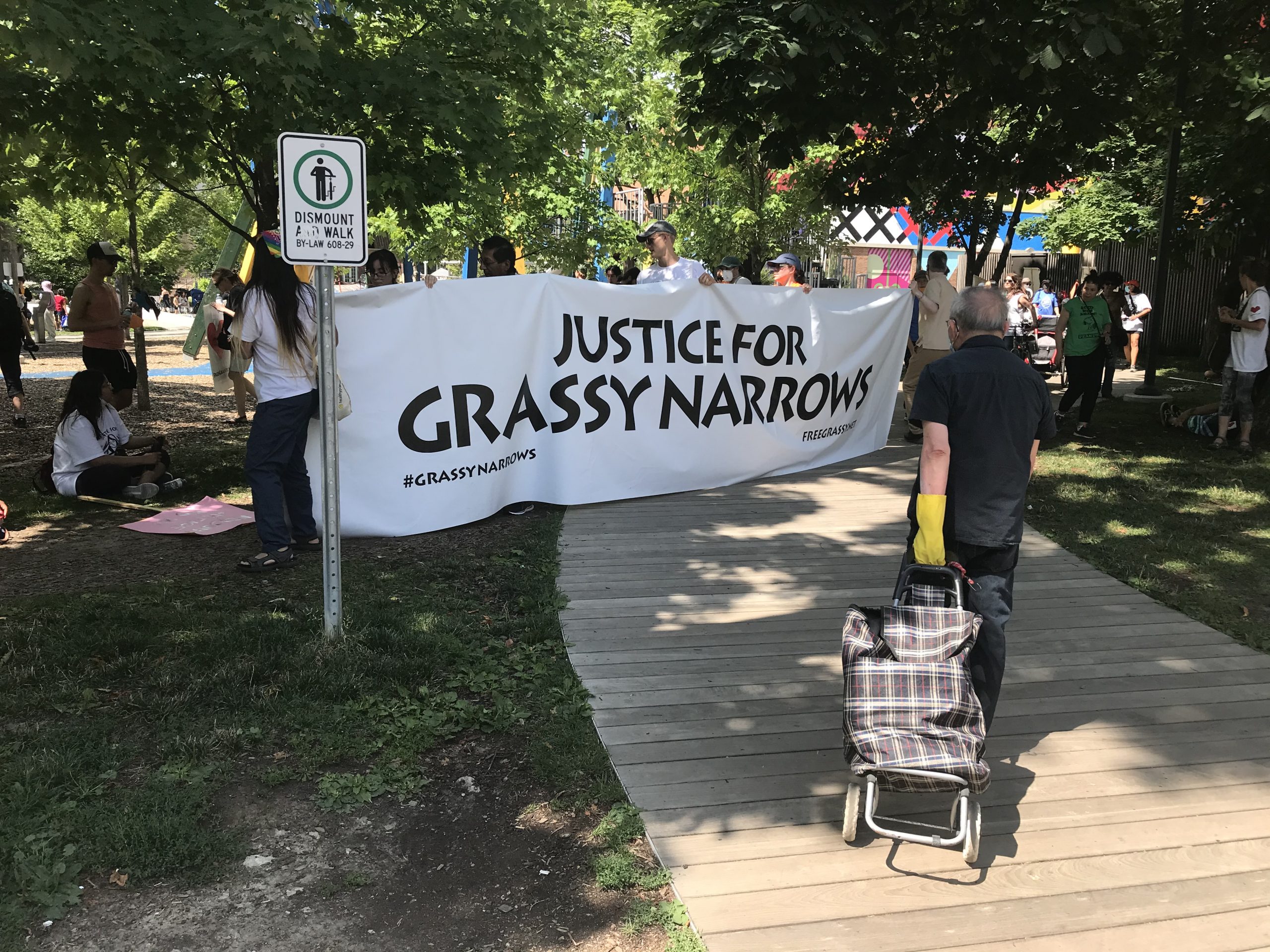 (Photo by the author at the July 21, 2022 demonstration at Queen’s Park in Toronto. You may use this photo, without alteration / modification as long as you link to this article)

The half century-long suffering of the stoic & graceful people of Grassy Narrows could very well continue for several more decades – unless they strategically enlist wider public support.

A FIRST TIME FOR EVERYTHING

I came to know about the July 21 demonstration at Queen’s Park by the people of Grassy Narrows because I follow their Facebook page. Without a moment’s hesitation, I registered on their website as an attendee. I knew that this was going to be a completely new experience for me. For one, I had never participated in any public demonstration earlier. And of course, this would be the first time that I would be meeting anyone from Grassy Narrows.

The event was really well-organized, with ample supplies of food and water for those in attendance and designated traffic marshals to avoid conflict between the marchers and the traffic in the area. Before the march began, the speeches were impactful and the cultural performances engaging. But I was there in a dual capacity – as an attendee as well as an observer. So, I floated around in the crowd of approximately 200 people to get a sense of how much public engagement the organizers had been able to generate among Canadians / Ontarians / Torontonians for their cause.

The only politician that I noticed there was the Ontario MPP Sol Mamakwa. His presence was to be expected – he represents that riding where Grassy Narrows is located, plus he is himself First Nations. I found it noteworthy that no other opposition MPP from the Ontario legislature was in attendance (I am excluding the governing Conservatives because they would have been at the receiving end of any criticism, plus they may have been under ‘orders from above’). I believe that it is the function of the opposition parties to lend support to the aggrieved in any unresolved issues with the government, so as to put pressure on the government of the day. It is tempting to say that their absence was disappointing, but my experience with them over the past one year had prepared me to be disappointed.

The other important constituency that was conspicuous by its absence was the so-called ‘racialized minorities’. By my count, there were at the most a couple of dozen people falling in this demographic – 3 ladies in hijabs, a group of 4 or 5 elderly ladies who (going by the sound of their internal discussion) were of Chinese origin, a sole elderly lady carrying a sign that said ‘Japanese Canadians for Social Justice’, about half a dozen black Canadians (none of whom seemed to be over 40 years of age) and a smattering of South Asians, their number certainly less than a dozen (myself included).

This reminded me of something that I have said to my Indigenous friends online many times: Indigenous people absolutely need to build extensive outreach among immigrant communities if they hope to build enough popular pressure on politicians to deliver on their promises to the Indigenous people. The stark reality is that the outcome of provincial elections in Ontario as well as the federal elections depends disproportionately on the 416 and 905 areas – where nearly half the residents were born abroad. Building support for Indigenous causes in this area / demographic is crucial in getting elected politicians to become serious about resolving the (plethora of) outstanding Indigenous issues.

PARTS OF THE WHOLE

I had expected the focus of the demonstration to be on the 3 components of the mercury poisoning crisis at Grassy Narrows that I have spoken about many times: the stalled mercury remediation plan of the Ontario government, the promised Mercury Care Home by the federal government (which appears to have been delayed right out of the gate) to treat the victims of mercury poisoning and the testing of soil samples at the premises of the industrial unit from where the mercury was discharged into the rivers.

Instead, I found that the focus was on compensation for mercury injury among the people of Grassy Narrows. Frankly, I had not delved too deep into this part of the mercury crisis. From an email in reply to my inquiry in August last year (i.e. about 11 months ago), Premier Doug Ford had mentioned that the mercury disability benefit payment had been ‘more than doubled’ beginning November 2018, and retroactive payments had also been made, as the payment amount had not been increased for inflation in ‘as many as 30 years’. That was the extent to which I knew about these payments.

Listening to the speeches, I learned that there appears to be some issue with establishing eligibility for these payments – some claimants don’t get acknowledged as being eligible for as long as they live. The devil would of course be in the details, but it baffles me that anyone living at Grassy Narrows – where the presence of mercury in the water has been known for half a century – would have to struggle to prove that they had been poisoned by it. Is this a case of bureaucratic obstructionism? If it is, then I also consider it a possibility that it is aided by lack of political will to do justice to the victims of the most serious industrial disaster in Canada’s history.

Let us now talk about the role and responsibility of the mainstream (and indeed other) media in a case as serious as this. Over the duration of three and half hours that the demonstration / march lasted, I saw Aboriginal People’s Television Network (APTN), CBC and CP24 covering it. Today, however, I am unable to find the coverage / reporting on any of their websites. I sincerely hope that this is the result my poor capability of making online search. I was told by a friend that a Global News report on the event on the night of July 21st was ‘great’ with ‘amazing footage’. I am unable to find it on the website of Global News. Again, I hope this is a reflection of my inability, and would be grateful if anyone can provide me with the links to any of the said media’s report on the event.

Separately, I had arranged with another mainstream media unit for their reporter / photographer to meet me at the event – but he didn’t. Later, I was told that he had asked other attendees to find me (instead of calling me on my cellphone; I had passed along my phone number).

At this, I am reminded of the relentless coverage of the ‘Senator Mike Duffy affair’ in our MSM – one had as much chance of escaping it as one has of escaping blazing sunlight in the Sahara Desert during daytime. That affair was, essentially, about $75,000 of taxpayer money that had been repaid (albeit in less than ideal circumstances). Surely, the 50-years-long (& counting) suffering of the gravest kind, of our compatriots, deserves a tad more media attention than it enjoys.

I spoke with several people from Grassy Narrows. I was amazed at how graceful they were despite their long suffering. I am sure that under similar circumstances, I would have been unable to keep my composure. They let me in their space without a moment of hesitation (the venue was of course helpful, but I doubt if they would have acted any differently if I had suddenly shown up at their Reserve). It was therefore all the more painful to realize the possibility that the path they have chosen to seek justice is less likely to lead them to the desired goal. This is of course my opinion, but the harsh reality is that at the political level, issues don’t get resolved because they are deserving of a resolution on grounds of humanity. In politics, things get done when the party in government feels threatened that it would lose votes in the next election unless it gets around to addressing someone’s grievances.

I had a fairly lengthy chat with a person who is intimately familiar with the various negotiations with the provincial & federal governments on the mercury file. This person told me that even the $85 million provincial plan of mercury remediation had been put in place by the previous (Liberal) government of Ontario ‘grudgingly’. According to this person, the current (Conservative) government is less than enthusiastic about getting the job done; their objective appears to be to kick the can down the road as much as possible. This only confirmed to me what I had concluded long ago, but I was also told by this person that the NDP has been the most supportive of the cause ‘on the ground’. This differs from my assessment – which I must admit was formed without knowledge of / access to the facts on the ground. I guess we will have to wait & watch Ontario NDP’s actions in the provincial parliament to judge for ourselves.

Reverting back to the demonstration / march itself, my personal assessment is that the turnout of attendees was too low for an issue of such grave significance. While I maintain my stance that the Indigenous people need to initiate, on a wide scale, outreach among not just immigrant communities but in other communities as well, it is also true that as Canadians, we need to do our part by allocating some of our time to speak up about their issues and participate in their struggles as much as we can.

Among the attendees at the event, there was a preponderance of seniors / elderly people. Especially noteworthy was the fact that the younger demographic was significantly underrepresented. Given that we are in a summer vacation right now, their numbers could definitely have been higher; they are the ones who will be a part of our Reconciliation with the Indigenous people over the coming decades. If they aren’t engaged in this cause, all our talk of Reconciliation will remain just that – talk. Given what I observed at the demonstration, that unfortunate possibility seems the more likely.